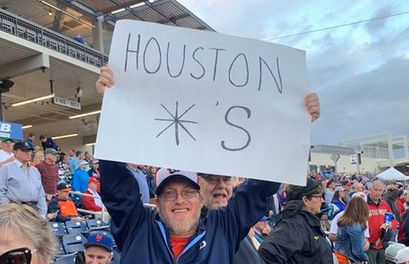 What are the chances of fans tossing Reese's Peanut Butter Cups into the Houston Astros dugout at some point this season?

You know: Not Sorry.

If the 'Stros were ever thinking of playing the repentance card in an effort to put their sign-stealing scandal behind them, they either whiffed on the opportunity or weren't interested in doing so in the first place.

It's pure coincidence that they share a Spring Training complex with the Washington Nationals. It was totally weird that 50 media types showed up on the first day of reporting, and 47 of them went straight to the 'Stros, upstaging the team that deserved its moment.

And what the Houston organization gave them was totally cardboard and plastic. Crocodile tears woulda been more sincere.

The Rangers don't expect to be alone in their alluded sentiment, either.

Setting an over/under for an entire team getting pegged over the course of a season isn't a prop that's seen every day, but the way things are shaping up for the 'Stros, they're on the board.

Not sure if new manager Dusty Baker's got enough juice to head this off at the pass, but he's out there campaigning:

Commissioner Rob Manfred may have given Houston players immunity if they'd come clean, which saved the investigation time and money. Now, though, it's eminently obvious a good number of other players could give a damn about saving time and money.

They see players who cheated and got away with it. Not only that, those scripted apologies didn't last very long.

That the 'Stros were cheating was an open secret among MLB's insular fraternity. Washington Nationals players have said as much; other players were calling them prior to the World Series and giving them hints.

In a breathtaking denial of reality and a stunning show of hypocrisy, Carlos Correa actually called out Nats catcher Kurt Suzuki for confirming it.

It's a puzzler, though, why the Nats catchers made intricate plans to counter the sign-stealing. They coulda just gone Old School, made some sorta faux call for a curve, and then had the pitcher bust a heater into the hitter's kitchen.

This is a tried-&-true move that can get a dude religion in a New York minute.

Seriously, who sits on an off-speed pitch in a down count against a dude with a 103mph fastball?

It's telling that the 'Stros and the Commish's investigators never initially said there was no buzzer taped to Altuve's bod. The wording was that they didn't find any evidence of it.

Nor could they, what with the little dude's double-clutch grip on his jersey before sprinting into the clubhouse to change into a not-so-modest undershirt.

Unfortunately, some fans are batshit crazy. The 'Stros sinned, but death threats under any sporting circumstances are idiotic.

Little Leagues banning anything Astros is understandable to an extent. Everyone knows how impressionable kids can be.

Apparently, the same can be said for Astros staff.

How sorry can the organization be when they don't tolerate fans who believe that more penance should be served and want to have a bitta fun with it?

This fan was holding this sign as the Astros players walked off the field after the National anthem. A few seconds later stadium security confiscated it. pic.twitter.com/58eMHuJ7K5

There's no need to vacate Houston's World Series title. Do they really want to flash bling that everyone knows involved their cheating? Every time fans see their name next to a 2017 World Series entry, they'll know what was done.

All indications are they're definitely gonna be wearing it all season, and if certain pitchers have anything to say about it, Astros hitters might be wearing more than that.