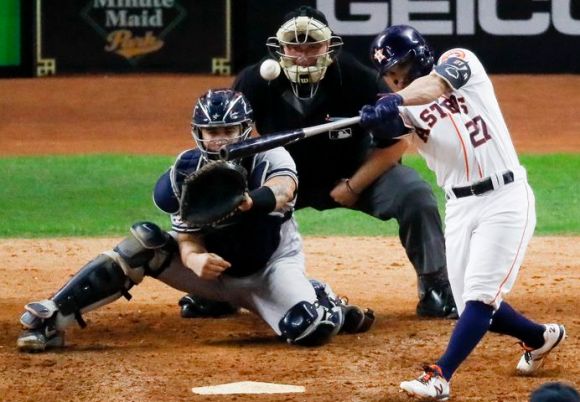 It was high, it was far, and it was gone.

And this time, it was referring to the New York Yankees' season.

The Bombers, second only to the vanquished Minnesota Twins in shock-&-awe, spent nine innings catching up to Houston, only to see the Astros' José Altuve deal the crushing blow immediately afterward.

Well, yes, if you're a Yankee fan.

Because of the Astros' dramatic 6-4 victory in Game 6 of the American League Championship Series, this will be the first decade since 1910-1919 that the Yanks haven't reached a World Series.

OK, it's a matter of perspective.

With the loss of a travel day when Game 3 was pushed back due to rain, both managers opted for the Tampa Bay Rays' innovation of using openers. The reality is Houston often parades relievers out to the mound whenever any game calls for it.

In this one, AJ Hinch and Aaron Boone already confirmed to each other they'd go this route. As a result, both went with a seven-chucker tag team. For the most part, they were effective.

Ironically, the two who weren't were the closers:

Getting there was half the drama:

Even with the Crawford Boxes, the Park Factor rankings list Minute Maid as No 12 as an offensive playground.

However, this didn't help New York when the rubber met the road. Dudes got stifled in a key area where they excelled all season.

Of course, this unfortunate Brett Gardner AB with a pair of runners aboard didn't help their cause, either:

Umpire Marvin Hudson blew a pair of strike calls to Brett Gardner, including one to ring him up. #Astros v #Yankees #ALCS pic.twitter.com/adFkNS82pA

Dude's a career Yankee, but entering free agency this winter, that may not be the case in a few months.

That was just one of the 22 times a Bomber came to the plate with the tying or leading run on base. This fact alone is a huge testament to the 'Stro relievers.

Not that every team isn't these days, but Houston's dedication to detail is where they're the savages. Call it the evolution of savagery. It's a key reason why they're going back to the Series for the second time in three years.