Nudges in the Mud Cause the Kentucky Derby's First DQ Result

Published on 4-May-2019 by J Square Humboldt 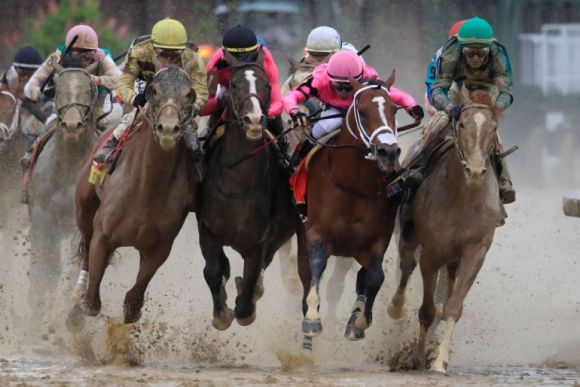 Churchill Downs could easily have hosted its 1st Demolition Derby instead of the 145th Kentucky Derby this year.

With a total of 19 entrants and a rain-soaked track, the organizers -- and especially the horses -- were bloody lucky no one got hurt or killed in the most exciting two minutes in sports.

The 145th, though, will forever be known as the most controversial 22 minutes in horse racing.

As it transpired, what shoulda been going on out there was this:

Unlike demolition derbies or any other race where bunching up occurs, horses that wind up in collisions don't spin out or get towed away for a retooling.

They get put down.

So there's a damn good reason why rules like Section 12 of rule 810 KAR1:016 exists. In short, disqualification is the penalty if ...

Yes. Yes they have.

Upon that awkward 22-minute review, the Derby's three stewards all agreed, this was interference ...

Well, that and a tenner will get you a mint julep at Churchill Downs.

Odds are Maximum Security's contingent will be ordering something stronger before proceeding to court. After all, that's the American Way anymore.

If so, it'll be proof yet again that judges have just gotta give plaintiffs who clog our courts with stuff like this the ruling they deserve:

Anyway, here's how it all went down:

Here, then are the official payouts, with Country House going off at 65-1:

This was 65-year-old trainer Bill Mott's first Derby victory, and it's disappointing OG feels like he's gotta apologize for it.

Shades of Naomi Osaka at the US Open!

Winning something's not supposed to be this way. The drama's cool and all that, but even with big bucks involved, governing bodies wrote a rule -- in this case, for safety's sake -- it was broken, and that's that.

Even hockey players can see that was interference, so it's time to turn the page and think about the Preakness in two weeks.

And for the second time ever -- Dancer's Image got DQ'd for a bad piss test in 1968 -- it's one where there will be no Triple Crown on the line.