Nelly Korda Teases the Field, Then Slams the Door, and Now Owns the Gold 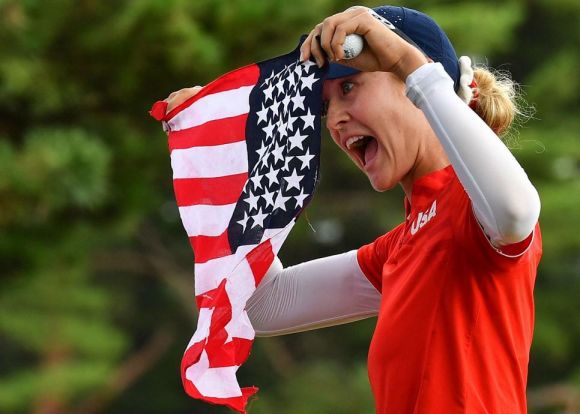 This is merely an observation, but it seems like there's anecdotal evidence for it everywhere.

Elite jocks do more than impart good genes into their young and complement it with high-end training and development.

These next generation athletes come equipped with the mental strength to power through competitive moments. Their composure and intensity come to the fore whenever the rubber really meets the road.

North Americans see this advantage displayed in most of their sports. For example:

Now, the Olympics has put another one on center stage, and it could easily be argued that mental fortitude is what earned Nelly Korda the gold at Tokyo's Kasumigaseki Country Club.

1998 Australian Open-winner Petr Korda and Regina Rajchrtová -- who made it to World No 26 in the tennis rankings -- have three kids. All are making their own names as pros:

She's already rung up three victories on the LPGA Tour, with the lastest happening on the final week of June at the Gainbridge elevating her to the World's No 1. In so doing, Nelly became the first American to hold that status since Christie Kerr in 2010. The first ever was Stacy Lewis in 2013-2014,

Damn right it does. Consistent success like that doesn't come without focus and intensity.

This is exactly what showed in the Olympic tourney's final round.

Nelly had been cruising the first three days, almost carding a 59 on the first day. She 'settled' for a 61, building a cushion from the field that varied between three and four shots. As far as pace of play goes, Nelly's the anti-Bryson. It's usually an admirable trait, but when her first pitch didn't clear the rise, she immediately gave it another go instead of gathering herself. The ball again came right back down to her as if it was a lost puppy.

Her double-bogey wiped away a two-pop pad. She'd fallen into a tie for the lead with Lydia Ko and the surprising Aditi Ashok.

Damn near 3½ rounds of work to lead the pack. Gone in an impulsive moment.

This, though, is where the wheat is separated from the chaff, where inspiration turbocharges determination. Adversity is where greatness is forged.

Maybe it was shrouded by Nelly's ice queen persona, but this is when her mental strength kicked in.

She steadied her game and followed that disaster with three straight birds:

The three-stroke lead was rebuilt, she resisted the charges from Ko, Ashok, and hometown heroine Mone Inami, and it was in the books. Nelly had gathered in the gold.

Supported by nerves of steel and a self-confidence that'll serve her well for the rest of her career.

In the aftermath, Inami made her countrymates happy by claiming the silver medal in a playoff with Ko. The New Zealander just as inexplicably plugged her approach into a deep sand trap on the 18th like Collin Morikawa did in the men's bronze playoff. She didn't recover, either.

Back to the champion, Nelly became the first American woman to win a gold in golf since 1900. She's only 23, so the odds are strong she'll be in Paris to defend her title.

There's little doubt that in three years' time, she'll have even more.