The Xander-Man Can -- and Does -- Grab Olympic Golf Gold

Published on 1-Aug-2021 by Alan Adamsson 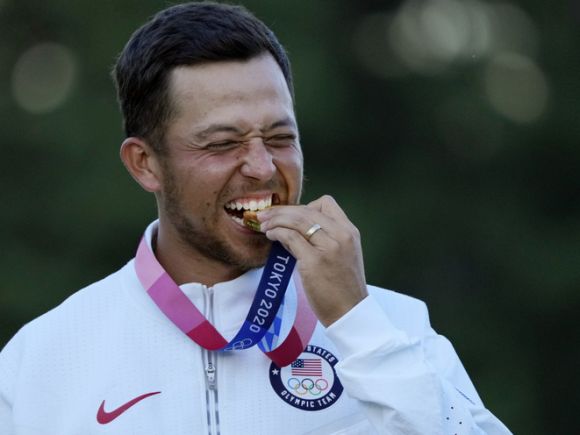 This was the sorta sports story that'd warm the left cockle of anyone's heart.

And yet, it was the drama that kinda got left behind as the Tokyo Olympics golf tournament kept right on rolling along.

Only in the Olympics could a feelgood gold medal story be upstaged by the sorta beer-run scramble you'd expect to see in an outtake from Caddyshack.

For all anyone knows, there were nine versions of how to celebrate earning a medal after 72 holes at the Kasumigaseki Country Club, and seven of them would have to survive a playoff to become reality.

Being real, this sorta logjam had to be expected.

The fairways were wide enough that Stevie Wonder coulda found them, and if for some reason that didn't happen, the first cut was a step above peachfuzz. Newly minted Slovakian citizen Rory Sabbatini -- all 45 years of him -- took advantage of it, mildly surprising anyone who didn't take a hard look at the course setup along with adopted countrymen bemused that a slapshot could take that much of a divot.

Try the hole with the flag in it. Sabbatini did a decent job of that all day.

Rory Sabbatini holed out for eagle to move into a tie for third. #Olympicspic.twitter.com/HFAC3qFnke

It's a great way to put together an Olympic-record round of 61.

Dude was so many threesomes ahead of Schauffele -- in the final group -- that he set the de factoi gold standard all day. For a good part of the round, though, the American son of German and Japanese parents kept ahead of the pace and the pack, admitting later that his mind often wandered to his pop and what a win would mean for him in more ways than being a proud father.

Stefan Schauffele had his sights on medaling as a decathlete for Germany 40 years ago when a drunk driver put paid to that notion. The accident busted him up badly and cost him an eye.

Young golfers grow up dreaming of Majors titles, not Olympic medals, and there's no indication Xander was any different. But here he was, in his mother's home country, just needing to keep cruising and he'd finish was his dad wanted to start.

But where's the drama in that?

The par-5 14th provided a huge dose of it. Schauffele pounded his drive into the woods, requiriing a penalty stroke just to be playable again. Three shots later, dude was faced with a 5-foot bogey putt to remain a stroke ahead of Sabbatini's mark.

He was now even with Sabbatini, and hometown hero Hideki Matsuyama was one stroke behind.

As if the course wasn't cushy enough, the tees on 17 were moved up to make the green more reachable. So was the bunker, but Schauffele chipped outta there, making a bird to regain the lead, and headed for 18 with the nouveau Slovak and a host of 15-unders looking on.

Somehow, dude found the right rough again and was blocked from a straight shot to the the flag by a patch of pesky trees. So, he laid up to within 98 yards and proceeded to lob a wedge with lotsa backspin -- 11 feet worth -- to within four feet of gold.

Dude had come too far to blow it now ...

The putt that sealed it for @XSchauffele.🥇pic.twitter.com/1qrcUnumdK

When Schauffele started putting his game together and reached the PGA Tour's elite three years ago, he began to have serious thoughts about the Tokyo Olympics.

Thanks for the recap @PGATOUR 👊🏽 https://t.co/2vbwdb3SWH

So, that was two medals down and the 'lesser' one to go.

The cast of thousands chasing it was anything but lesser, though. It's ironic in any event to have an undercard take center stage after a champion's been crowned, but the fact this mini-tour contained Majors champions made it just as compelling.

That included the dude who didn't wear a cap, saying the sun wasn't gonna get through his Northern Irish moss anyway ...

Dude's made a mint in this game, and it's not like the Olympics -- or the Ryder Cup, where he also goes capless -- just showed up on the schedule outta nowhere. Haberdashers anywhere will confirm it doesn't take that long to fashion a custom job.

It might well be that troublesome border between the Republic of Ireland and those six Ulster counties in the north. Rory McIlroy learned and developed his game in the Irish system, but he's an Ulsterman. Brexit didn't do that part of the world any favors, so it's more likely he's golfing for Eire but just being diplomatic about it.

It got kinda fun when the four-man and three-man groups got narrowed down to a fivesome after Matsuyama's putter continued to fail him and Paul Casey never got untracked on the first playoff hole.

Ultimately, though, it came down to the fourth extra hole with a couple of Pac-12 alums -- CT Pan (Washington) and Collin Morikawa (California) -- duking it out for the bronze.

It wasn't pretty. Pan found the rough on his drive and laid up on the first cut, while Morikawa dodged a fairway trap before absolutely plugging the sand when he had the entire green open. Not even the Caddyshack gopher was gonna dig that one out.

Pan then drained an 8-footer after it was all Morikawa could do to land his wedge in the same area code, and an amazing damn-near-worst-to-third was complete.

By that time, who knows whether or not Schauffele was paying attention?

And one not to be lost before the final chapter was written.