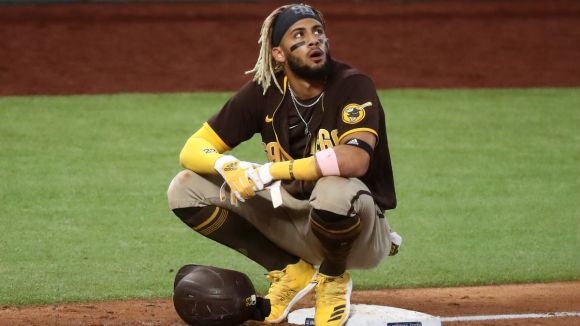 More than any other sport, baseball clings to tradition with painful rigidity.

Any attempt to increase the appeal of the sport for a younger audience is inevitably foiled by the breaking of some archaic unwritten rule that causes baseball purists far and wide to quiver with rage.

Of course, these silly edicts are frequently ignored or marginalized by talented kids who ostensibly represent the future of the sport.

The 21-year old badass is dominating this plague-tainted MLB season thus far, and dragging his team right along with him.

The Padres were spanking the Rangers recently when everyone got their fungoes in a bunch.

You may be wondering what terrible indiscretion was committed by Tatis.

We must protect the innocent among us:

So while the Padres were celebrating the genius of Fernando and their impressive 14-3 lead, Rangers manager Chris Woodward and his fun bunch were feeling a little butthurt.

The Rangers just threw behind a Padres hitter because the previous hitter (Fernando Tatis Jr.) hit a granny on 3-0.

Here's a thought: how about you learn how to not give up 14 runs and not give up 7 RBI to a kid who can barely legally buy a beer. pic.twitter.com/y68zDQW8dS

Of course, Woodward bitched some more about the disrespectful 3-0 pitch granny afterwards, but then the criticism continued from an unlikely source.

Unwritten rules are mostly dumb. Reaction to Fernando Tatis’ HR is over the top. But if Jayce Tingler put on the take sign on 3-0, Tatis needs to take.

Yep, that's the impossibly named Jayce Tingler giving his young phenom shit about missing a sign and ruining centuries of tradition in the process.

Oh, and Junior also made Texas sad with his two homers and career-high seven RBI's.

Which leaves us with the following:

Dude was basically pressured into apologizing for hitting a grand slam.

This game is going to extract every single ounce of joy from this poor kid within five years.