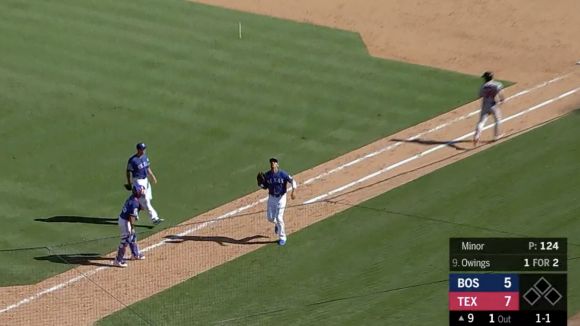 Well, it appears that baseball as we know it has officially ceased to be.

The moment our national pastime blinked out like a dying star occurred during a seemingly innocuous game between the Boston Red Sox and Texas Rangers.

In a decision that will live in infamy forever, the Rangers organization decided to ethically compromise the entire sport just to service the ego of starting pitcher Mike Minor.

You see, dudes thoughtlessly placed personal achievement over the team dynamic, causing purists everywhere to cry out in horror.

You may feel we're blowing this out of proportion, but you'll feel differently in a moment:

The Rangers intentionally let a popup drop in the 9th inning so Mike Minor could have another shot at notching his 200th strikeout of the season.

Minor recorded that strikeout on the next pitch he threw. pic.twitter.com/nMqeTa2PJo

Apparently, Minor and catcher José Trevino were screaming at 1B Ronald Guzman to let that foul pop drop, much to the chagrin of the Rangers faithful.

The fact that the fans weren't even aware of this important milestone speaks volumes.

It was clearly important to Minor, as he was still on the mound, up 7-5 in the top of the ninth inning in a game in which he ended up throwing 126 pitches.

While his elbow didn't actually explode, this was still needlessly excessive.

Manager Chris Woodward mercifully took the ball away from him after the strikeout, with one out left in the ninth.

Red Sox skipper Alex Cora was well aware of what was going down:

We know Brett Favre and Michael Strahan aren't losing any sleep over it.