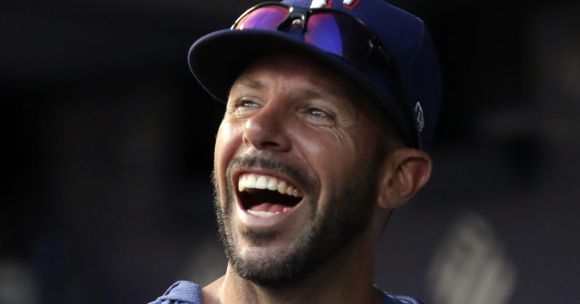 The days of the expensive celebrity manager in MLB are basically over, with the trend in recent years to hire young former ballplayers on the cheap.

Always on the cutting edge of such things, the San Diego Padres have taken this trend and ran with it, adding obscure to the list of criteria.

If you guessed this particular dude would secure the position, you're completely full of shit.

The suggestively named Tingler never made the Show as a player, topping out at Double-A.

He's spend his entire career since then in the Texas Rangers organization in various roles, including quite a bit of time in the Dominican Republic before spending the bulk of the last three seasons in the front office.

You're probably beginning to see why the Padres consider this to be such a dynamic hire.

Maybe if we listen to the man, it might begin to make some sense:

Take a look back on Jayce Tingler’s day as he was introduced as the #Padres manager! pic.twitter.com/k5lmuHNqKa

The Padres unveil their new hat when introducing Jayce Tingler as manager pic.twitter.com/I2bfQBsNqL

That is a pretty radical hat, though.

The bilingual Tingler is already energizing the fanbase:

Got this very cool quote from the Spanish language portion of Jayce Tingler's presser this morning. pic.twitter.com/6IY1qU8INN

Jayce Tingler. No thank you. Find someone with a real name and not this Star Wars shit pic.twitter.com/VcqGdPm18S

Hopefully we'll find out why Tingler was named after a futuristic sex toy before Spring Training begins.