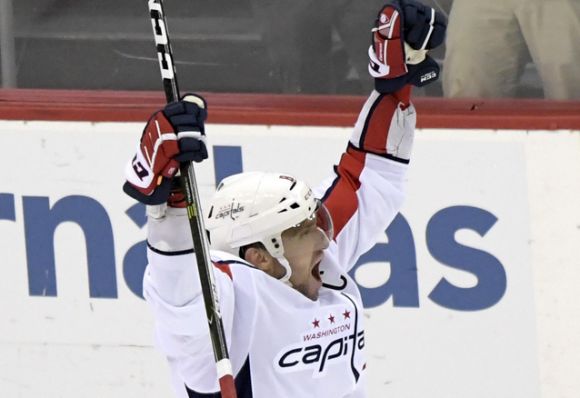 There's the Great One and the Great 8, destined to be Nos 1-2 all-time in the NHL's career goals list.

Health's a consideration because being the Crushin' Russian could ultimately take its toll.

It definitely wasn't an issue tonight.

Ovie mixed it up a bit in the New Jersey Devils' crease tonight before backgliding to the right circle and one-timing a perfect dime from countryman Evgeny Kuznetsov to join seven other hockey immortals by racking up his 700th NHL goal:

As they're often wont to do, Russians were coming outta nowhere to express their joy.

Ovie's in his 15th campaign. It took him 1,144 games to reach this level, becoming the NHL's second-fastest to do so. Gretzky did it in 866 games. Do note, though, that even he admits Ovechkin's operating in a more challenging environment:

That said, at age 34, Ovechkin's impressively well on his way to another 50-goal season.

Elite skills, electric intensity, and a pure joy of playing the game probably figure prominently into it.

All aspects of the game, too.

Dude gets as much of a rush outta being the Crushin' Russian as he does in being one of the best snipers of of all time.

There aren't many ifs left as to whether he'll do it.

Whether or not this is a more challenging era in the NHL, dude's odds-on.