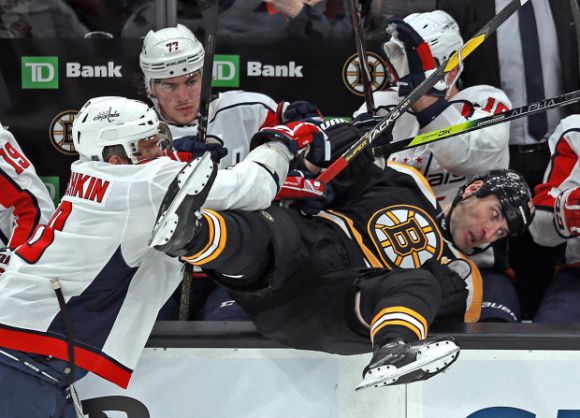 They can say what they want about the late Raiders godfather Al Davis, but dude understood the underlying premise of all contact sports better than most.

Davis didn't mind villainy -- he damn near branded it with his team's Silver-&-Black colors -- and insisted on total intensity.

Most of all, he got the golden rule of street fighting:

It's always been clear that Alex Ovechkin is a strong believer in this principle, considering the point that defensemen are often de facto QBs, setting up the playmaking for most possessions.

The only thing keeping him from being Gordie Howe 2.0 is no need to drop the gloves. Not when Tom Wilson's suspension-free and in the lineup.

Anyone who's seen Ovi play, though, knows he's no shrinking violet. Dude's never afraid to lay a hit when a hit'd come in handy.

Even those of the love-tap variety, as the Boston Bruins' 6-9/206cm blueliner Zdeno Chára can attest.

The 41-year-old Slovak plays like he's ageless, but he probably felt mortal after this encounter with the Rushin' Russian:

Sure, Chára's height created an elevated fulcrum, which added to the optics, but it's the thought that counts.

It's possible Ovi's been thinking about it since 2012, when Boston's now-captain caught up with him:

Ovechkin goes 6-3/191cm and is clearly a student of leverage.

Besides his introducing Chára to the Capitals' bench, dude offered the Bruins another example for good measure:

Ovi usually utilizes that leverage for adding power to his shots.

Like this snapper from the left circle after taking a behind-the-net feed from Wilson:

Dude added an empty-netter to seal a 4-2 victory that extended Washington's dominance over Boston to 14 straight victories.
What's amazing about that streak is the Bruins aren't exactly a buncha dudes named Moe.

They actually outshot the Caps, 41-22, in their first meeting with Boston since embarrassing them compliments of a 7-0 whitewash as the cherry on top of their Opening Night celebration.

That's when Washington raised their first-ever Stanley Cup banner to the rafters.

The Bruins haven't had the pleasure since 2011.

However, their more immediate obstacle to anything like that happening in the near future would be that juggernaut that is the Tampa Bay Lightning.

Meanwhile, the Metropolitan Division's settled into yet another battle between the Caps and Pittsburgh with a few pursuers close behind.

Boston's got one more shot at Washington in the regular season, at the aptly-named Capital One Arena on Sun 3 Feb.

Odds are Ovechkin and Chára won't go outta their way to find each other, because odds are they won't have to. Both will undoubtedly be extremely available.