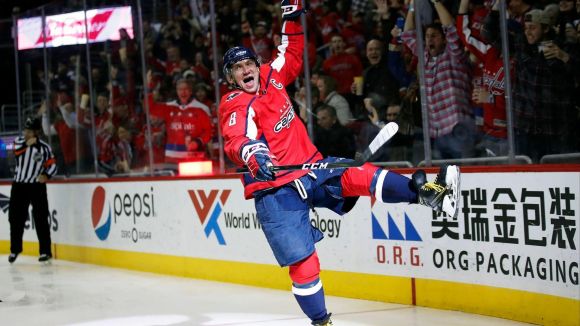 Yes, the Pittsburgh Penguins' Sidney Crosby has a few seasons to go before he notches Goal No 600.

However, the Kid's got three Stanley Cup rings.

Alex Ovechkin and the Washington Capitals are hockey's version of Jim Kelly and the Buffalo Bills.

Dudes are always knocking on the door but never getting it to open.

However, no one's ever gonna pin it on Ovie for not giving it all he's got ... and more.

The relentless Russian's hi-octane game has the Caps in the thick of another charge at the Cup. That included last night's 3-2 overtime triumph against a Winnipeg Jets club that has high aspirations of its own.

It was a fitting clash, then, to feature Ovechkin's historic 600th goal, his second of the game:

First of all, the honey shot features his wife, Anastasia Shubskaya, who in the Russian way of doing things, is now Anastasia Ovechkina.

Secondly, Ovie has a portfolio of highlight-reel goals, but the grinding chipper that became No 600 is just as much of who he is and how he gets it done.

Of all the goals he's scored, this classic acrobatic act from 2006 is the one that will be replayed forever:

The first is whether he'll stay healthy long enough to challenge Wayne Gretzky for the all time record. At an average of 30 goals per season, that's damn near another decade of prolific productivity. He's 32 now.

Could he be another Gordie Howe or Jaromír Jágr?

The second question is whether Ovechkin will ever hoist the Stanley Cup.

Good point. It'll happen when it happens if it happens.

In the meantime, Ovechkin will continue with his crusade to make it happen.