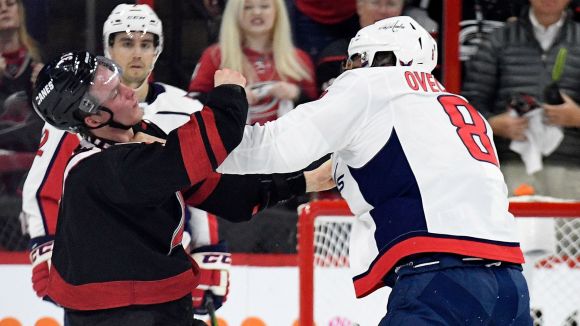 Andrei Svechnikov played a season in the USHL and another in the OHL before being drafted second overall by the Carolina Hurricanes last spring.

So he shoulda known what the NHL's all about before lacing up his skates last fall.

And he definitely shoulda known there's a reason Alex Ovechkin lives up to his Crushin' Russian reputation every chance he gets.

Dudeski loves all aspects of the game and always has.

So Ovie's countryman knew he was playing with fire when he clearly didn't read the sign.

Svechnikov's had a credible rookie season for the 'Canes, going 20-17-37 in the regular season. Carolina was coming home after dropping the series first two games in Washington, and dude assumed the homies needed some sorta spark.

And by Thor's hammer -- the first Russian czar was a Swedish Viking, so the Thunder God fits here -- the 19-year-old winger was gonna ignite one by going after the Caps' captain.

However, he's the dude who got lit up.

Not surprisingly, Svechnikov's in concussion protocol.

Ovie's initial WTF look indicated he wasn't interested in having a go, but the rook insisted.

As a side note, full marks to the bleached blonde in the 'Canes jersey who was 'way ahead of the crowd in realizing their dude was in big trouble.

Seems like she's had more life experiences than the 19-year-old.

Russian-on-Russian violence is a rare phenomenon. After this beatdown, it may become even rarer.