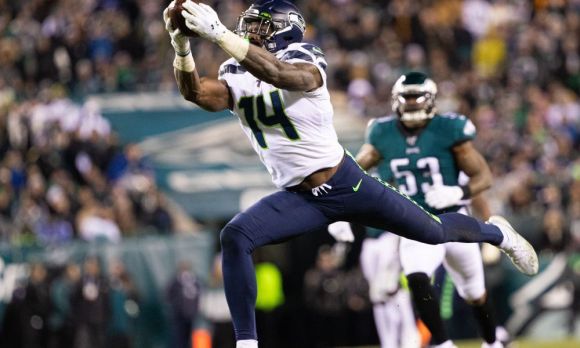 There's a difference between the sage advice of letting the game come to you and doing something about it when it gets there.

Somehow, it seems no one knows this like the New Orleans Saints, and the Seattle Seahawks were doing their best to make sure the same thing didn't happen to them.

Which was wise on Seattle's part.

Sometimes, a bitta villainy can go a long way.

As a result in today's NFC Wild Card action...

Proof yet again that Britain's elite SAS force's motto is the formula for success:

For some reason, the Saints haven't figured that out yet.

Not even after Rams CB Nickell Robey-Coleman decided in last season's NFC championship game that it was better to ask forgiveness instead of permission ... but only if it was necessary.

In retrospect, that turned out to be a great play for LA.

So how did the Saints respond? By thinking if Emily Post re-wrote the pass interference rules, all would be rainbows and unicorns.

The Vikings, however, took a hint from the Rams. When the rubber meets the road, for chrissakes, make a damn play and let others figure it out later.

If they figure it out at all:

That is now, officially, a great play for Minnesota that punched their ticket to the next round.

Meanwhile, everyone else can contemplate the inconsistencies of rules enforcement from the comfort of their respective homes and/or country clubs.

Besides, in 60 minutes of football, no one play decides a game. That just happened to be the last play that everyone remembers had a bearing on the game.

As to the banged-up Eagles playing the banged-up Seahawks -- after all, Marshawn Lynch and Robert Turbin because they were down to one healthy RB -- their battle for survival was yet another confirmation that this is a team game, right down to the 53rd dude on the roster.

Of what? Philly slinger Carson Wentz getting buzz-dinged by Jadeveon Clowney?

As they say, hockey is a contact sport. Football's a collision sport. It's a reason why QBs get to slide before one happens. Wentz opted not to slide, and at 6-5, 255lb, Clowney's not exactly laser-accurate when he hurls himself at a target.

Carson Wentz went to the locker room after taking this hit from Jadeveon Clowney #SEAvsPHI pic.twitter.com/gdwK1UXCn0

When Seattle got thin at a ball-handling position, they went out and got two RBs.

When Philadelphia needed a backup for a QB who's had injury issues, they got an aging vet outta the bowels of ESPN.

The Eagles got a courageous effort outta Josh McCown -- there's no mistaking his hamstring got very angry, too, but he soldiered on --  but really, backup chuckers get few to no snaps in practice, so what else should anyone have expected?

Especially rookie DK Metcalf, who torched Philly's secondary with 7 grabs for 160 yards, including this house call on a 53-yard advance:

The former Ole Miss Rebel was actually the ninth WR selected in last spring's draft. It's enough to make you wonder if The Shield's annual scouting combine in Indianapolis is nother more than the PR exercise it was designed to be.

While McCown was creaking around out there, doing the best he could, Beast Mode was actually finishing some business:

You truly do get what you pay for, and Philadelphia paid dearly this year.

Conversely, with the mid-season trade for Clowney and the late signing of Lynch, Seattle dared and won a winter trip to Wisconsin.