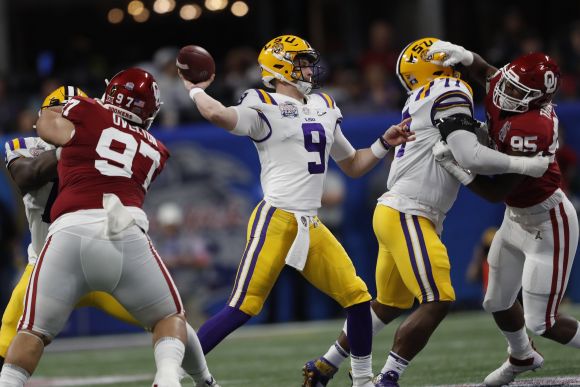 First of all, as much fun as it is to blast the CFP Selection Committee, it didn't really matter who they anointed as the 4-seed in this year's bracket.

All any of the possible opponents were destined to do was serve as the Washington Generals to the relentless scoring machine that is the LSU Tiger offense spearheaded by the incredible Joe Burrow.

It's as if the Borg have arrived.

Okahoma won that dubious honor and promptly watched helplessly as the Bayou Bengals set an astounding 25 records while being destroyed, 63-28.

Here are just a few of them:

What a historic College Playoff performance for LSU.

The hell of it is, when you take a look at the game highlights, you'll swear many of the receivers Burrow targeted were covered.

Dudes were uncanny. Not only did they have magnetic hands, the way they sensed where the ball would be the instant they turned for the catch was damn near a Jedi mind trick.

Burrow's laser-like accuracy carved up the Sooner secondary to the extent that LSU's running game merely seemed like an add-on.

Combine the gaping holes created for them with Burrow's all-day pass protection, and it's no wonder the Tigers' o-line is recognized as the best in college football. They've obviously been doing it all season. For example, check out 6-4, 373lb senior Adrian Magee double-pancake from the Vanderbilt game:

With the victory aleady in the bank by halftime -- they almost covered the over all by themselves -- dude even found time during the break to accept team accolades in social media:

LSU's defense rose to the occasion yet again, too. Oklahoma's shown their patented explosiveness all season, but they couldn't sustain much at all.

Jalen Hurts was 15-31 for only 217 yards and a touch, and he was fortunate to compile those. The Tigers kept his personal ground game in check, and once cornered in the pocket, severely restricted his ability to go throughhis progressions.

Dude will forever be known, though, for being the first player to make the CFP bracket for two different teams. What's more, Hurts was a key reason both squads got there.

But that's gonna be the answer to a trivia question.

The 2019 Peach Bowl was all about the phenomenon that is this season's Bayou Bengals:

We'll now see it in action one more time as they prepare to turn the CFP championship into a home game in the Superdome.

How tall of an order that one's gonna be remains to be seen, but one way or another, it's shaping up to be legendary.