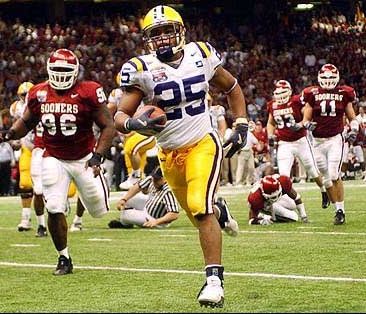 Joe Burrow and his LSU crew have definitely risen to mythical status.

That'll happen in an undefeated season when the Bayou Bengals saunter into Tuscaloosa and outshoot 'em.

The thing is, Oklahoma has been deemed by the Selection Committee as one of the four teams deserving to be in the College Football Playoff bracket.

So, are the sportsbooks saying those dudes goofed?

The reality is the sportsbooks figured this to be an 8½-point spread when they initially posted the number. It's the playing public that went berserk on it. That figure rose to 11 within 10 minutes, and look where it is today.

Bovada now has the line at LSU -14 with the total set at 75½ and the moneyline a robust Oklahoma +405 and LSU -610. It's an ever-changing world, though, so be sure to check where they are before you make a play.

Here's what a whole buncha computer simulations have determined, and the results agree with the public: The Sooners can keep up with LSU. Dudes averaged 43.2 points per game this season and amassed 554.2 total yards per.

Like LSU, the Sooners have a great quarterback. Jalen Hurts didn’t win the Heisman Trophy, but he did pass for 3,632 yards, rush for 1,255 more, and score 18 rushing TDs. He'll ensure Oklahoma moves the football.

Don't discount Oklahoma's string of close wins. The Sooners outplayed their opponents in all of those games and were probably unlucky not to win by more, which was down to an inconsistent defense that solidified later in the season.

What's more, their schedule was better than given credit. The Big XII was only slightly behind the Big Ten as the best conference this year.

No team in the College Football Playoff has the résume the Tigers possess. Dudes beat Alabama (CFP No 13), Auburn (12), Florida (9), and Georgia (5).

LSU has the best slinger in college football. They averaged 47.8 points per against tough SEC opponents. LSU is the best team in a top-heavy conference.

There is an intangible, though, and that's the health of RB Clyde Edwards-Helaire. Dude's a dynamo in his own right who forces opponents to play honest and not zero in exclusively on Burrow. He hasn't practiced all week and if he plays, is no guarantee to be at full speed. Caveat emptor.

Hurts has a ton of big-game experience. Dude backed up Tua Tagovailoa last season at Alabama and started ahead of Tua the season before. Hurts already has a National Championship win. He's been a big-time hero. Like always, he'll give it his all in this.

It won’t be enough. LSU dominated much better defenses than Oklahoma’s this season. The Tigers scored 46 against Alabama. Burrow passed for 393 yards. LSU rushed for 166 from 40 carries.

In the SEC Championship, LSU dominated one of the best defenses in college football. Georgia allows 274.5 yards per game. LSU rushed for 142. Burrow passed for 349. Oklahoma has no shot of stopping the Tigers’ offense.

This means Oklahoma must rely on Hurts. Dude's played as well as anyone not named Joe Burrow. But in this one, he faces a defense that's allowed a total of 10 points in their last couple of games.

LSU’s defense hasn’t peaked. The offense is the best in college football. The Tigers beat the Sooners in a no-value moneyline play, but they're gonna have to do it in a shootout. What's more, this is the second-highest ATS line in the CFP's short history. Only Alabama's -14½ spread on the Sooners last year was higher, and Oklahoma covered. In a game this big, they should do it again, but it's too close to the number.