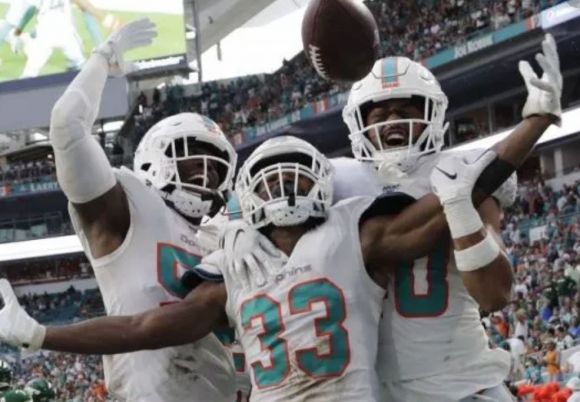 This musta been karma's version of balancing out the World Series.

That meant the only obstacle between every NFL home team pleasing its fans this weekend was the sad-sack Miami Dolphins.

The 'Phins were playing the Jets! Everything was possible on Karma Weekend!

The legend of Ryan Fitzpatrick has apparently entered a new phase.

Dude threw three touchdown passes -- two of them to rookie Preston Williams -- on the way to Miami's 26-18 victory that put them in the anti-tank column for the first time this season.

The first was enough to think he'd rubbed himself all over with garlic or something else that'd repel the Jet secondary:

The second found Williams covered by a Jet secondary that opposing fans have come to know and love:

Of course, this being the Dolphins, Williams later injured his knee and is done for the season, proving the Tanking Gods haven't totally abandoned them.

The same can't be said by anybody about former Dolphin fearless leader and current Jet coach Adam Gase:

It was obviously a good day to play the locals, then. Sooner or later, the home favorites were gonna start showing up. Finally, every one of them beat the spread.

That even includes Houston's crew dousing Minshew Mania, 26-3, in London where there's actually an embassy for the Republic of Texas.

Back in the Colonies, the Baltimore Ravens have had their days against Emperor Palpatine's Patriots, and Sunday's 37-20 victory was one of them.

Lamar Jackson did his all-aroung thing ...

Remember before the 2018 draft how word was he had no shot at being an NFL QB?

And, being real, the Los Angeles Chargers did wax the Pack, 26-11, at that bandbox in Carson, but there was so much green-&-gold in the stands, if Green Bay had won, it woulda counted as a home triumph, also.

Of course, every alleged Bolts home game is like that.

Steeler nation has taken over the Chargers game 😅

Home-sweep weekends happen now and then, but it's doubtful another one in the near future.

It sure as hell won't happen next week. Cincinnati, Cleveland, and the Jets are all at home.