UCLA Strikes a Blow for the Pac-12; Sissy-Thumps LSU

Published on 4-Sep-2021 by Alan Adamsson 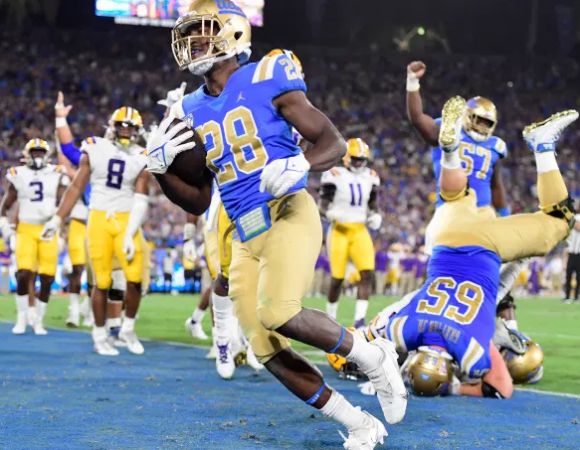 After Oregon had hired Chip Kelly away from what amounted to be his own personal skunk works for offensive schemes at the University of New Hampshire.

Dude had carte blanche to put his theories into action in his years at Oregon and, to an extent, revolutionized the game.

It's the to an extent part that was the caveat.

A huge one, as it turned out.

Yes, Oregon racked up its gains -- 378 yards -- through the air, but that's not the essence of Kelly's philosophy. No matter how talented the Duck slingers were during his time in Eugene, dude's a run-first kinda coach.

So the ultimate play in that game was surely the one that galled him the most:

Auburn's fire hydrant of an RB -- Michael Dyer, down or not -- simply had more strength, power, and stamina than the defense he shredded for 143 yards on only 22 carries.

Speed and pace of play were cool and all that, but if a team isn't defined by that ultra-physical element, it's likely not gonna be a national championship team.

So, after securing his financial future by peddling his myth to the Philadelphia Eagles and San Francisco 49ers, the Chipster migrated back to where his way of doing things could have more of an impact.

This time, though, dude was gonna cover that to an extent issue.

It took a few frustrating seasons at UCLA, but at long last, Kelly has the sorta roster he believes can maximize his offensive strategies. He's got the personnel to ground-&-pound if necessary, but most importantly, they're well-equipped to his preferred style of slash-&-dash.

LSU is quickly receiving a harsh hint that last year's 5-5 team wasn't the exception; the 2019 title team was the exception. The Tigers may be closer to Ole Miss and Auburn -- as opposed to Alabama -- than they want to believe.

But still, they're still an SEC team -- just like Vanderbilt and Missouri, truth being told -- and carry that status with them wherever they go, which once in a blue moon includes a trip to the West Coast.

The Chipster's charges had a 44-10 warm-up over Hawai'i under their belt, so they were full-force ready to strike a PR blow for the Bruins and possibly the entire Pac-12.

And they delivered the goods with a 38-27 triumph over the Bayou Bengals:

The stats revealed a balance more to Kelly's liking:

There could well be cause for concern in that UCLA's aerials defense surrendered 330 yards to Max Johnson & Co, something the rest of the pass-happy Pac-12 surely noted.

LSU coach Ed Orgeron must still have a bitta USC in him. Dude couldn't resist responding to a trash-talking UCLA fan before the game by calling the Bruins' school color sissy blue.

He shoulda known that line had the potential to come back with teeth.

While LSU retreats to Baton Rouge to get healthy from sugar-coated doses of McNeese State and Central Michigan, UCLA's gotta hope its Pac-12 brethren shake outta whatever the hell came over them this weekend:

It added up to an underwhelming 4-8 non-con weekend for a league that likely needed that three-conference bowl alliance more than the Big Ten and ACC.

They say the most a college football team will improve is between its first and second game.

For UCLA, that could be a scary proposition to its opponents.

For LSU and the rest of the Pac-12, they can only hope that old saying is accurate. Otherwise, they could spend the next four months singing the blues.