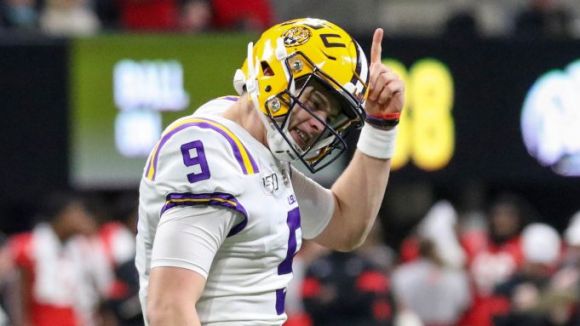 Really, exactly who did the defending national champion Tigers' coach think he was fooling?

Then again, all appearances are dude clearly bought into the concept himself, and he wasn't fooling.

Clemson was the underdog in this game, Swinney knew it, and LSU proceeded to prove it by boat-racing them, 42-25.

The first clues that dude foretold the oncoming storm were glaring during Clemson's first possession. He was already reaching into his bag of tricks:

The one that worked best was vanilla by cmparison: a reverse to speedster Tee Higgins.

They helped jet Clemson into a 17-7 lead, which was a new experience for LSU this season.

Meanwhile, LSU's OC Joe Brady was trying to figure out Clemson DC Brent Venables' 3-1-7 zone alignment. It took a few possessions, but when it did ...

As he's done all season, Joe Burrow was spectacular enough to become mythical in his own lifetime.

Look at those all-purpose numbers:

The Ohio native's not the only one, either.

The Bayou Bengals' wealth of weapons ranks with any phenomenal team's in college football history:

LSU's best defender is freshman Derek Stingley Jr, and he'll surely return for 2020 when it's highly possible Ed Orgeron will lean on his defense like he did his offense this season. Odds are he'll see an exodus of his offensive players to the NFL draft, but even if they returned, it'd be difficult to imagine a season like this happening again.

It was just a perfect storm.

Clemson's already reloaded for next season, and with Lawrence returning, they'll have better odds than LSU of returning to the title game again next season.

Look for them to get back to thunderstriking real soon.