The Chipster Continues to Remake Eagles in His Own Image

Published on 5-Mar-2015 by Alan Adamsson 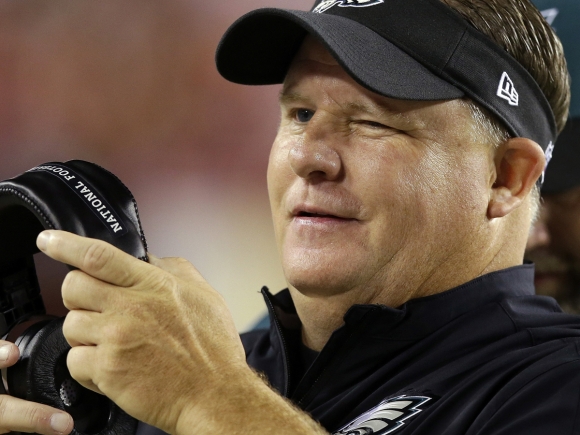 Not sure which is more fun, watching Chip Kelly operate or seeing raised eyebrows from the ossified NFL old guard.

Kelly came out of an offensive coordinator's role at FCS power New Hampshire with a plan for Oregon as coordinator for Mike Bellotti. Yes, he tweaked noses there, too, but it's safe to say it worked out rather well.

So the Philadelphia Eagles knew what they were getting when they threw tackling dummies worth of dosh at him. Dude's delivering. Time and again.

Why wouldn't Kelly be taking a hard look at getting Mariota? He's the one who found him hidden away in Hawaii, where no one else was bothering to look.

It's an understatement to say the speedy QB with sufficient passing skills thrived in Oregon at the helm of Kelly's system, and it can be argued there'd be no better place for him in the pros than with the Eagles.

Kelly going 10-6 in straight seasons with a roster not totally suited to his system speaks for itself. Given what he's had to deal with at quarterback makes the talent begets success bromide no more obvious than it is in any other sport at any level. He's got his ways, and they've worked wherever he's gone. And others have taken note.

How about a rewind with a more objective outlook:

So yes, this is a decent deal for the Buffalo Bills. Whether Kelly stays long enought to regret it is another matter altogether.

Suffice it to say that systems do work at any level. Among other things, they're not as player-dependent, and in a league where the average running back's career is less than three years and devastating injuries are a way of life, going with a plug-&-play system is a decent option.

Especially if it's Kelly's system. And in Philadelphia, refuse to buy in at your peril.