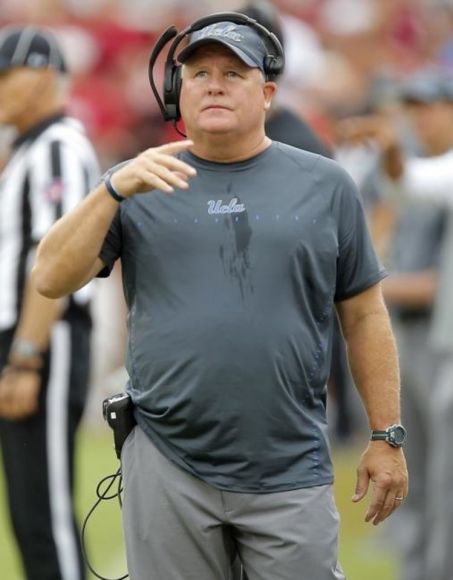 However, the evidence suggests otherwise.

In what has become his signature, the Bruins are once again off to an 0-3 start to the season.

Of course, last year it was 0-5, so there's something to build towards.

Their most recent humiliation happened Saturday night in a noticeably empty Rose Bowl, where the No 5 Oklahoma Sooners took a massive 48-14 dump on the outgunned Bruins.

While there isn't a living soul who thought UCLA could actually win this game, a little effort would've been nice.

And to think the Chipster used to be such hot shit.

That was before his disastrous foray into the NFL.

At this point, there just doesn't seem to be any possibility of this working out for the former genius.

We aren't alone in this sentiment:

The Chip Kelly/UCLA era at this point feels completely hopeless

Chip Kelly, 3-11 now as UCLA's head coach, is by some metrics (like record and stuff) the worst modern coach in UCLA football history.

What Chip Kelly is doing to UCLA is coaching malpractice.

QB with raw talent but who has no business starting yet

Zero willingness to promote the program to fans, media

Laws vary by state, but he may very well lose his coaching license for that.