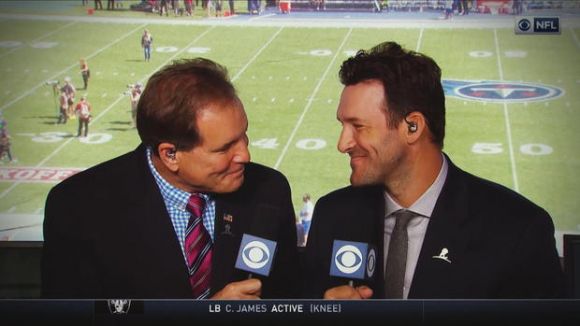 Virginia Tech gave Duke all they could handle in the Sweet Sixteen, ultimately falling 75-73 to the charmed Blue Devils.

Hokies head coach Buzz Williams was extremely animated on the bench as usual, but may have had more pressing concerns on his mind.

You know, like Tony Romo and the NFL on CBS.

Here's the Buzzer sharing his feelings with Tracy Wolfson at halftime:

As you can see, dude made an impassioned plea for Romo to join his new professional life mate Jim Nantz in the booth for the second half, throwing Bill Raftery into the dustbin of history in the process.

If Buzz has his way, Raftery will have to take that double order of onions to go.

While this idea may seem impractical, Romo did hoop very well in high school and even suited up for the Dallas Mavericks back in 2017.

Of course, this bold proposition does insinuate quite a bit about the seemingly platonic relationship between Nantz and Romo.

Buzz seems to be under the impression that the pair are inseparable, both personally and professionally.

Obviously, this isn't the case.

Now, as for Joe Buck and Troy Aikman ...

Yep, that level of on-air chemistry takes years to cultivate.