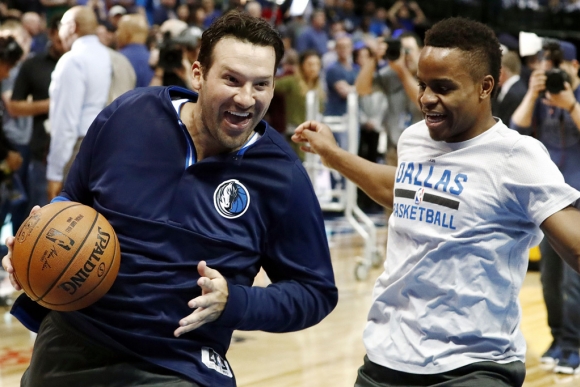 In a surprise move, the Dallas Mavericks signed point guard Tony Romo for the final home game of the regular season.

Mavs owner Mark Cuban, never one to shy away from a publicity stunt, arranged a nice tribute for the now seemingly retired former Cowboys QB.

So what exactly are we talking about here?

Cuban had been dropping hints about signing what he termed a "pass-first point guard" for a few days.

Of course, he was referring to the newly minted broadcaster.

Romo actually did participate in warmups and other gameday activities while in uniform, and was even introduced with the starters.

He even got his very own locker.

If the gifted agitator Cuban had gotten his way, Romo would've actually played in the game, but NBA commish Adam Silver was not receptive to that idea.

They did tease it a bit, though.

Dallas lost the otherwise insignificant game, 109-91, to the Denver Nuggets.

Romo was, in reality, quite the basketball player in high school, with many thinking that would be his path.

However, it's off to CBS now.

Phil Simms will be sorely missed.