Iowa Beats the Buzzer Again, This Time with a Kiss 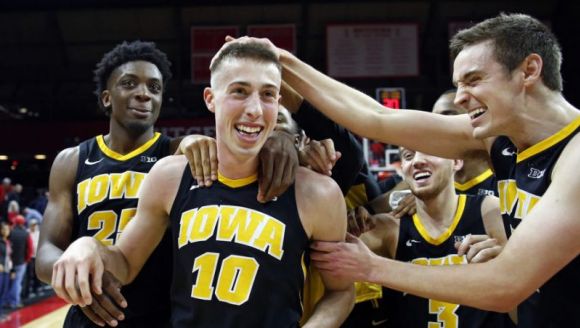 Winning conventionally just doesn't do it for the Iowa Hawkeyes.

No, these dudes seem to enjoy draining every last ounce of emotion from their fan base while simultaneously breaking the spirit of their opponents.

For the second time in as many games, the Hawkeyes beat the buzzer to completely ruin their Big Ten opponent's day.

The most recent one was pretty insane:

The Hawkeyes found themselves up two very late at Rutgers when the Scarlet Knights bounced in a three from the top of the key to take the lead.

However, there was still a little time left:

You won't see an ending with crazier consecutive bounces. 😱@IowaHoops gets the most important roll: The last one. pic.twitter.com/l2IlwZ2yUW

We completely agree with you, Big Ten Network.

First of all, how about some love for that Rutgers kid with the many crossovers and the kind iron.

Unfortunately, he was bested by Iowa freshman Joe Wieskamp, who gathered in that loose ball and somehow kissed it off the glass from the corner.

The announcer was so fired up he inadvertently conjured the ghost of Jack Buck with that call.

However, we still maintain that Bill Raftery would've been more appropriate.

Onions and a kiss for everyone!