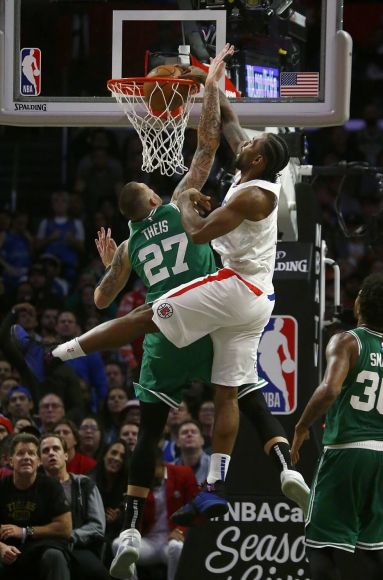 Obviously, Kawhi Leonard is a highly sophisticated robot who's been living among us for some time now.

We've more or less grown comfortable in his presence, even though dude's still comically awkward around actual human beings.

Recently, the well rested Clipper and reigning Finals MVP did some truly dastardly things on the court against the Celtics during a 107-104 OT home win.

As usual, his comfort level on the floor was diametrically opposed to his general discomfort in front of a live microphone.

We'll begin with this really sick dunk that may have permanently altered the genetic makeup of Boston center Daniel Theis:

If the deranged Steve Ballmer isn't careful, he could be next.

Anyway, Kawhi was asked to break down this particular play afterwards, and managed to do so in the most literal and humorless way imaginable:

Clippers’ Kawhi Leonard goes full monotone to describe blow-by-blow his poster dunk on Daniel Theis and game-sealing block: “What do you want me to say? Patrick threw me the ball, I took two dribbles into the paint and tried to jump high and dunk the basketball.” pic.twitter.com/tKkwC7REmZ

Although we've unfortunately heard that terrifying laugh, there wasn't even a trace of a smile in evidence on this occasion.

The assembled media throng was certainly amused as they listened to the machine lay it all down for them.

Kawhi is changing the way we communicate, for good or ill.

Oh, and there was the matter of that game-sealing block:

Kawhi Leonard with one of the most emotionless game-ending blocks you'll ever see 😐pic.twitter.com/AmBsdgwc6P