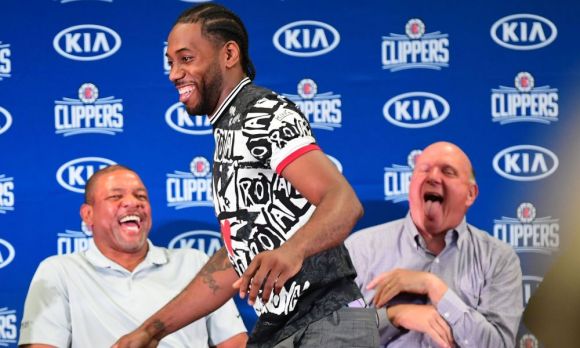 The Los Angeles Clippers have transformed themselves into legitimate NBA title contenders in one glorious off-season, and team owner Steve Ballmer is almost paralyzed with joy.

In fact, he may have just soiled himself.

The Clips formally introduced Kawhi Leonard and Paul George to the masses recently, so there were certainly valid reasons to get excited.

But this was something else altogether.

Be afraid, be very afraid.

There was a palpable mix of fear and bemusement in that auditorium as Ballmer cackled madly.

When he asked the bewildered crowd to stand up if they were as excited as he was, they had no choice but to oblige the deranged billionaire, as he seemed capable of anything at that point.

As for Leonard and George, they seemed genuinely alarmed at the scene, probably each reassessing their life decisions internally.

Kawhi even laughed nervously a couple of times, proving yet again that humans and robots can co-exist.

You may be under the impression that Ballmer only loses his shit in the context of basketball.

However, you would be mistaken.

The former Microsoft CEO has a long history of such behavior.