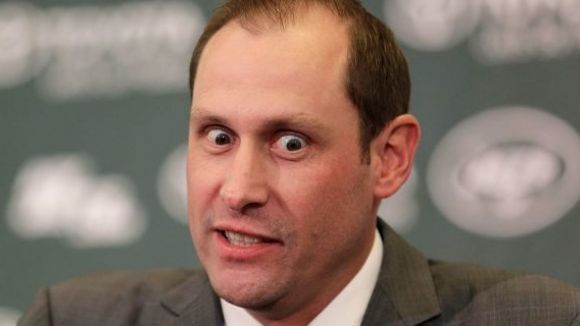 They also may have inadvertently hired a deranged serial killer.

The obligatory press conference that officially ushered in the Gase era in New York wasn't your garden variety presser.

By all means, let's have a look at the man who the Jets organization just empowerered to boldly guide the franchise into the future:

Adam Gase has his eyes on the prize. Literally.

This is some press conference. pic.twitter.com/vZxBs0gWeG

The Jets brainwashed Adam Gase. Only explanation for this twitch. pic.twitter.com/aP53o4w33j

Indeed, it does appear that the Adam Gase replicant was malfunctioning or had literally just received further instructions from his home planet that were violently hard-wired into his mind portal.

This disturbance in the force was visible throughout the terrifying ordeal.

Adam Gase completely at ease as he’s introduced as the next Jets head coach.

He looks like he’s wondering which exit he’ll use when the alien invasion happens. pic.twitter.com/5STsfXE75s

While many folks just assumed that the crazy eyes were a logical byproduct of an intense drug episode, an actual doctor quickly debunked this theory.

The fact dude was probably just nervous is perfectly logical, although it may not inspire much confidence amongst the Jets' long-suffering fan base.

According to an ESPN reporter, the former Dolphins coach did this shit in Miami as well, so maybe he's just abnormally intense.

Perhaps some peaceful gardening at home might relax the obviously stressed-out Gase.

Although he may still nut in your eye.