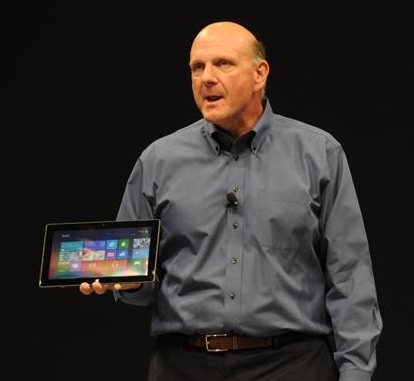 Steve Ballmer, who was recently forced out as El Honcho Grande at Microsoft, forced himself into the bidding for the Los Angeles Clippers last week. And today, he's the proposed new owner.

As such, he's just possibly relieved a brace of headaches.

Ballmer also created one other, but no one can please all of the people all of the time. More on that later.

Lately, he's had time on his hands because he sat on his hands at the wrong time and then repeatedly misfired when trying to catch up. Excuse the geek alert, but this is who the NBA is getting:

Fortunately, he comes complete with a $20billion balance sheet. If Ballmer can make like fellow Microsoft alum Paul Allen by keeping his mouth shut and his wallet open, things should be fine.

However, he also comes to the Clips in the midst of licking his wounds. At least they won't be as much of a challenge as following Bill Gates at Microsoft was.

This development is a Shelly Sterling production. No word yet whether her billionaire bigot hubby will consent, but at a mind-blowing price of $2billion with a favorable tax scenario, Donald Sterling's share of the take would be enough for him to start his own damn league and then call the Klan and Cliven Bundy to drum up a few season ticket buyers.

It was later reported that Mrs Sterling had managed to have Mr Sterling declared mentally incapacitated, which -- if it holds up -- would negate his presence from the process entirely. This is the result of private terms stated in their trust, and few details have been revealed. It's not known if this is a decision Donald Sterling can fight.

Ballmer was the major bankroll behind Chris Hansen's bid to bring the NBA back to Seattle, so while relief is only a bigot's nod away in Tinseltown, the tension has shifted northward:

So now NBA franchise hopefuls in the Emerald City may need to warm up to obvious allies they had spurned to date.

But that's all hand-wringing that can be done another day at a much lower temperature. For now, it just may be that Clips fans can start to hope that a Ballmer Era is on the cusp, and maybe -- just maybe -- he'll spring for an upgrade from those hellaciously ugly uniforms the Clips have been stuck with since dinosaurs roamed the earth.

Especially since the last dinosaur could well be on is way out.