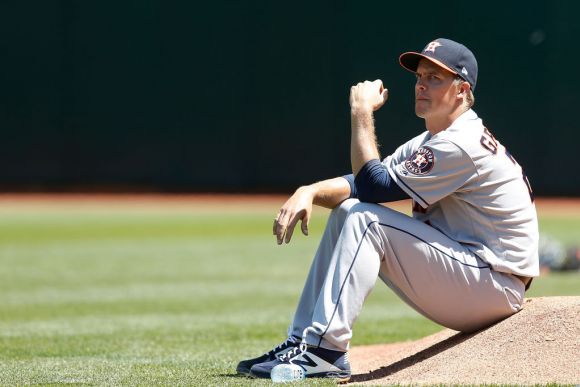 MLB is frequently accused of not marketing their star players adequately.

Of course, Rob Manfred and his suit brigade just scoff at this notion and blame everything on Mike Trout.

But the league is absolutely culpable.

For example, why wouldn't they want Zach Greinke and his dynamic personality projected into every living room in America, nay the world?

Here's Zach charming the shit out of reporters before his scheduled Game 3 start against the Rays in Tampa:

Zack Greinke, a man of many words. pic.twitter.com/XPdYENNmST

Apparently, there was some sort of gas leak in the room that only affected Grienke.

The rest of the session was every bit as scintillating:

Zack Greinke being Zack Grienke. Hinch later said the reason the clubhouse culture is so great is because he lets them be who they are. You do you Zach, and bring us the W. https://t.co/RYYPDMQafK

The dude is a powder keg.

Perhaps Greinke was too amped up, because his start at world famous Tropicana Field didn't go well at all.

He couldn't get out of the 4th inning, allowing six earned runs courtesy of three Rays long balls.

Zach Grienke sucked today. Plain and simple. He's always lacked that mental toughness you need to pitch in the postseason. (That bulldog mentality) Hopefully he puts together because the #Stros need him. #Astros

These people should fear not, because Justin Verlander and Gerrit Cole are still being rostered.