Published on 6-Feb-2019 by Alan Adamsson 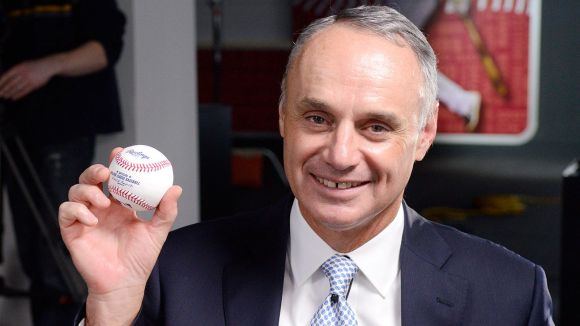 Or maybe he's gearing up for a bid to replace the French family as the grand poobah of NASCAR.

Whatever the hell it is, MLB's top gun is doing his best to be Top Gun.

Because it's pretty clear dude's got a need. The proverbial need for speeding up the game.

If this is the case, baseball fans -- and especially players -- would be happier if he jacked up the pace of free agent signings this winter.

Manfred's obsessed with hurrying up the game by a few minutes, which would be fine if all the fans were houseflies. Minutes count for them.

To be fair, the six mound visits thing was interesting, likely responsible for shaving a whole 180 seconds off of concessions stand opportunities.

Now, the Commish is engaging in talks with the Players Association for a few more rule changes, such as ...

If that's the way Manfred insists on going, here's a better idea:

If it was good enough to speed WWII the hell up, why wouldn't he impose it and get fixated on something else?

Then again, he already is.

Like getting the National League to accept the designated hitter.

Believe it or not, this argument's been happening for damn near a century.

There's more to the resistance than being Old School. DH's tend to be higher-priced veterans, which isn't exactly trending as an owner's priority for any acquisition these days.

Since Manfred's in a chatty mood, though, the Players Association has revisited a few other ideas of their own, two of which make lotsa sense:

There's nothing wrong with brainstorming ways to make anything better, but despite moans and groans to the contrary, baseball's awash with cash like never before. Something's going right.

Being real, if MLB wants to do more to attract Millennials, Gen Zs, and younger, pace of play isn't the answer. All they need to do is follow hockey's lead and raise the profile of second screens.

The yard's got more potential than just another selfie backdrop.

Some clubs have already added in-game features to the mobile experience, which will do more to put patooties to seats than sending everyone home a few minutes earlier.

Baseball's all about data. If the Commish is all about innovation, then providing it more to the spectators should be his priority.