Justin Verlander Gets His Censorship On after a Recent Game 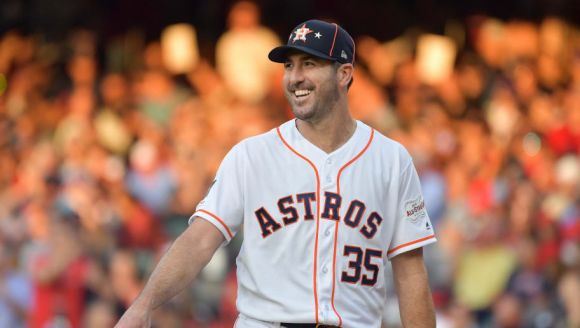 A baseball game between the host Astros and the Detroit Tigers began in 2019 and somehow ended in 1950.

Former Tigers ace Justin Verlander apparently has a history with a Detroit Free Press reporter by the name of Anthony Fenech.

Well, it all started after Verlander tossed a complete game gem against the Tigers, but still managed to lose 2-1 because his offense decided to take the evening off.

Despite those 11 K's, the only two hits he allowed just happened to leave the yard, hence the loss.

That's when things got uncomfortable.

Verlander insisted that Fenech not be allowed access to the clubhouse, to the point that he wouldn't speak to the rest of the gathered media if dude was in there.

The Astros obliged him and physically barred Fenech from the room, reportedly even dispatching security guards to handle the situation.

Here's the relationship lottery winner explaining himself the next day:

I declined to speak with the @freep rep last night because of his unethical behavior in the past. I reached out to the @freep multiple times before the game to notify them why and to give them an opportunity to have someone else there. Ironically they didn’t answer.

Based on this statement, it's entirely possible that Verlander doesn't know what irony is, but we'll let that one go for now.

Although I tried to avoid this situation altogether, I’ve still reached out to @freep multiple times today with no response. They’re still not interested in my side of the story.

Now, this all sounds reasonable if accurate.

Fenech eventually did overpower the guards and find his way into the room, but Verlander had fled the scene by then.

Not surprisingly, the newspaper is disputing the Cy Young contender's claim that he's tried to contact them, insisting that they'd be more than happy to speak with him.

The Astros' organization also released a statement about their use of techniques derived from the James Dolan media relations correspondence course they've apparently taken online.

This all seems pretty silly, especially when you consider how trivial the disagreement between these two dudes appears to be.

In the future, if Verlander and the Astros wish to avoid violating terms of the current MLB CBA, they could simply let the reporter in and then ignore him.