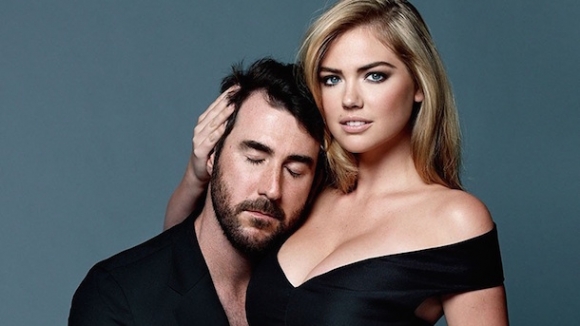 This doesn't need to be pointed out, but here goes.

Here's how they met, courtesy of MLB's promotion wing back in 2012 when Upton was just 19:

Last season, the Detroit Tigers' longtime ace finished an unpopular second to Boston's Rick Porcello for the 2016 AL Cy Young Award, and the little lady is not pleased.

After the formal announcement, Upton took to Twitter and poked a profanity-laced hole in MLB voting logic while standing up for her man.

Well, she's a little off factually on that last one, but is there anything more appealing than an attractive woman using profanity while talking about sports?

For those of you scoring at home -- and, as Keith Olbermann once said, we hope you are -- that would be a no.

There's little justice or sense in Porcello winning, despite only garnering 8 out of 30 first-place votes.

When reached for comment, Hillary Clinton reportedly let out a long, deep sigh.

However, the real issue lies in the fact that Verlander was left off of two ballots entirely.

That is nonsense, dudes and dudettes.

Obviously, Porcello had a great year, winning 22 games for the Red Sox and bouncing back nicely from a putrid 2015 season.

However, a pitching victory is one of many baseball statistics that have been somewhat discredited in recent years. As a unit of measurement for moundsmen's mastery, it's simply not as important as, say, WHIP, a stat in which Verlander happened to lead the league last season.

At 33 years of age, this may have been the 2011 AL Cy Young winner's last best chance at another one.