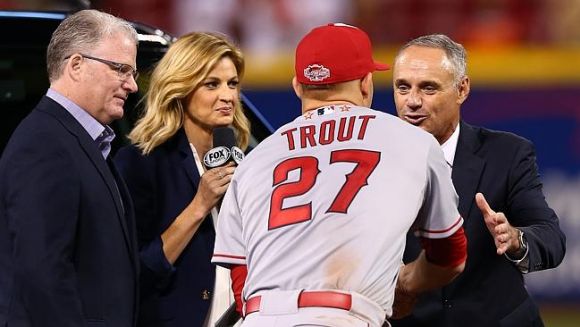 MLB isn't really adept at marketing their young stars, particularly in comparison to leagues such as the NBA.

However, it appears that the fault actually belongs not to the league office, but at the feet of the players themselves.

The woefully misguided MLB czar suggested that Trout -- in addition to playing baseball at a historic level and being a really good dude in general -- should also make more of an effort to market himself and the game of baseball.

What Manfred was attempting to accomplish with these statements, beyond seeming ignorant and juvenile, is anyone's guess.

The backlash was swift and terrible, complete with lots of public head-scratching and puzzlement.

To their credit, the Angels quickly jumped to the defense of their franchise player, releasing the following statement:

Today, the #Angels released the following statement on OF Mike Trout: pic.twitter.com/xFLURtZ4bT

Yep, that about sums it up.

Trout himself made a brief statement, as well, reinforcing the Angels' point while making Manfred look even sillier in the process.

This humble dude just wants to play some ball.

There are myriad reasons why dude isn't more popular, including the fact that he plays on the West Coast for a pretty shitty team.

None of these reasons are the fault of Mike Trout.

Here's a bitta footage of Mr Angel marketing himself on the field:

Yeah, that's clearly not good for the game.