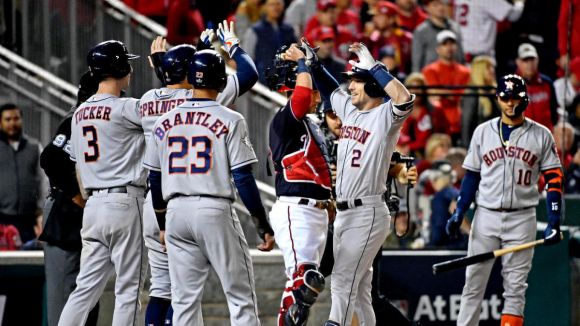 So, this is how these dudes pounded out 107 regular-season victories this season.

Houston turned the Fall Classic into the Astro Showcase in dynamic fashion:

The Nats hardly had time to react.

Formerly slumping 3B Alex Bregman drove in the game's first run with a sharp first inning single, providing a hint of things to come.

Because later, dude returned to herd home four more to ensure that this is history's third World Series where road warriors prevail.

His output alone was all José Urquidy and skipper AJ Hinch's usual posse outta the pen needed to shackle the Nats.

No one woulda thought back in July that Urquidy would become only the second Mexican ever to start a World Series game. He got knocked around in his MLB call-up, sent back down to work out a few control issues, and rejoined the big club in September a more refined hurler.

Now, dude joins the venerated Fernando Valenzuela by becoming only the second Mexican slinger to start a World Series game.

He was the low-budget who? in Houston's killer rotation after Gerrit Cole, hard-luck Justin Verlander, and Zach Greinke.

After allowing only two hits and zero walks in five innings, Urquidy may still be low-budget, but he's not an unknown anymore.

No doubt he and the rest of Houston's dugout like the cut Bregman took in the seventh inning to put this one outta reach and guarantee a return to Minute Maid Park.

Actually, some would say it was more fast than far.

It was definitely a no-doubter the moment horsehide (it isn't) touched hardwood (it is). Then again, so was the rest of the game after the Stros' two-run first and Urquidy being in rhythm:

This is the first game where it truly looked like a Wild Card team was taking on the club that had the season's best record.

Washington's now got some serious regrouping to do. Whatever Houston noticed in their video reviews -- like jamming Juan Soto and staying outside on Anthony Rendon -- it's made a difference.

Then again, so has the Astros looking like they're the Astros.