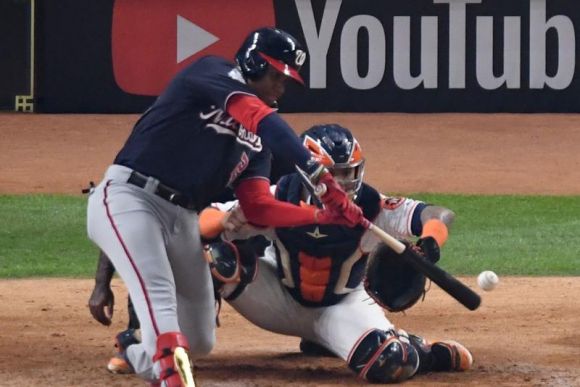 The Washington Nationals scored five earned runs off Gerrit Cole in Game 1 of the 2019 World Series in Houston.

This accomplishment seems almost unthinkable, but we have the official box score to prove it.

The 5-4 Nats win has wrested home-field advantage away from the Astros, regardless of what goes down in Game 2.

However, we're not here to talk about that.

No, we need to convene a symposium on Juan Soto's opposite field solo homer in the top of the fourth inning.

Words can only besmirch it, so we're just going to show you:

20-year-old Juan Soto with a SHOT off of Cole to tie this game up!! pic.twitter.com/XJz2loVNR8

Here's an angle that does it a bit more justice:

We're still in awe of the size of this Juan Soto blast. #WorldSeries pic.twitter.com/jVx5oidbCe

And look where the terrified baseball finally came to rest:

This is where Juan Soto's home run ball ended up. #Nats #WorldSeries pic.twitter.com/D3BnPBIwf2

Its new home will be much nicer and kinda historical:

Juan Soto’s home run ball, retrieved from the Minute Maid Park train tracks after tonight’s game, is headed to the @baseballhall. Soto joined Miguel Cabrera, Andruw Jones and Mickey Mantle as the only players to homer in the World Series before turning 21. Thank you, Juan! pic.twitter.com/8biDfnGSUO

You may be wondering about the distance on that beauty:

Yeah, that can't possibly be correct.

i really wish the yankees were in the world series but since they're not, i'll take 20-year-old juan soto hitting an approximately 900 foot home run onto the train tracks off cole

Here's the game that was wrapped around it:

Just know if that was some punk kid admiring what he thought was a bomb instead of the 2017 Series MVP, the interwebs would've gone nuclear by now.

Turning Soto's shot into mythology was enough for one night.