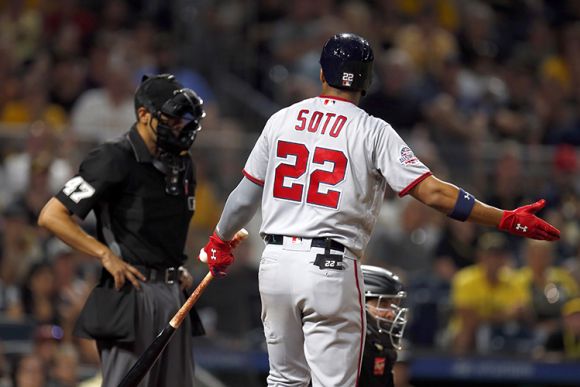 Greg Gibson has been in a rather nasty mood of late.

The unhappiest umpire in MLB is infamous for his itchy trigger, but recently, dude seems to be reflexively tossing players from ballgames with barely any provocation at all.

You may recall a few weeks back when a Cubs bench coach was asked to leave the dugout after the hyper-sensitive Gibson took exception to Willson Contreras and his apparent breach of baseball etiquette.

As you can see, Gibson really needs to take a pill.

Apparently, Soto had the temerity to question the competence of Gibson, specifically this egregiously bad call in his previous plate appearance:

While it's true that arguing balls and strikes is frowned upon, these umpires really need to calm the hell down, particularly Gibson, who seems to interpret everything as a personal affront to his character.

There isn't one single person who comes to the ballpark eagerly awaiting a gratitious display of machismo from an umpire.

Perhaps instead, they wish to see the teenaged Soto, who's pretty good at baseball.

Gibson has done an awful lot of damage over the years, as this montage will confirm:

Maybe he could just work the bases from now on.