ALCS: Gerrit Cole and a Pair of Bombs Stop the Bombers 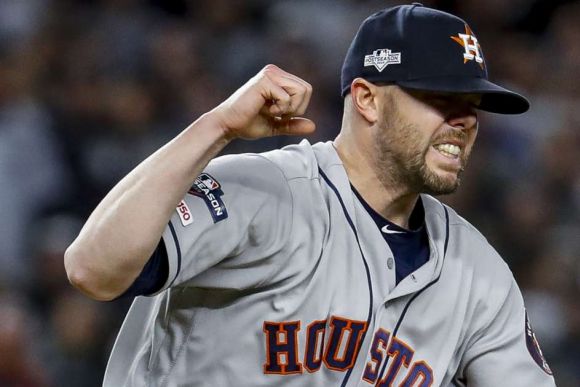 What do you do when a scouting report advises to go after what are usually first-pitch strikes, and ...

Are you gonna be licking your express-loving chops for Gerrit Cole's first serving to reach you or what?

Didi Gregorius shoulda been careful what he wished for.

Cole may have tendencies, but dude's no robot. Already protecting a run on José Altuve's leadoff homer, the former UCLA Bruin reached deep into his reservoir and pulled out a knuckle curve.

The Yankees' prolific shortstop gagged on it, pounding the pitch into a easy grounder to second that ended the threat.

The Bronx Bombers would try and die against Cole more than once with two down in Game 3's early going, but:

That it's tough for the bombingest team left in the playoffs to bomb away against some of the game's top starters.

New York's been getting their chances against Houston's superlative starters, but they're preference is to pound rather than rake, which has consequences.

It's been costing them, as the more versatile -- to this point -- 'Stros showed for the second game in a row with a 4-1 victory:

This series has been tough on the blues, too.

Plate umpire Cory Blaser got his bell rung in Game 2, and who really knows how that affected him for the rest of a strange inning?

This time, crew chief Jeff Nelson took a bean shot behind the plate that forced him to depart with what's likely a concussion.

That goes for the Yankees, too. They might wanna take a harder look at their scouting reports.