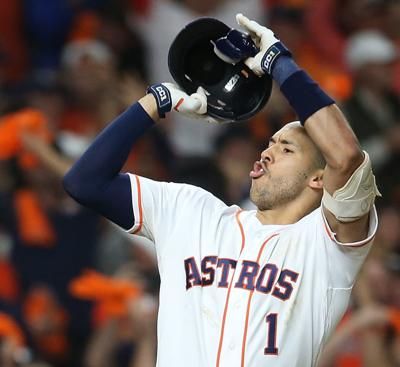 This will be forever so until the machines take over.

Gary Sánchez, for one, probably can't wait for that to happen.

The New York Yankees catcher had one of the more bizarre AB's in modern baseball history, and of course, it'd happen at a pivotal moment in Game 2 of the American League Championship Series.

There he was at the plate in the 11th inning of a 2-2 game in Houston with runners on first and second, having a shot at giving the Bombers a commanding 2-0 lead in the series. Putting it mildly, everything happened:

Here it all is in living color:

Now, being real, JA Happ had to witness all that -- expecially the wide called strike -- while waiting to take the mound in the bottom of the 11th.

Why in the name of Steve Dalkowski didn't he put his first pitch out in the Great Beyond, too, to see what Blaser'd call?

But he didn't, and Carlos Correa was grateful:

Put it all together, and this 3-2 Astro victory tied the series at a game apiece.

With the exception of that nutso Sánchez AB and a few questionable decisions by New York manager Aaron Boone, this one was what we'd expect from the two most powerful teams of 2019:

Houston thus avoided the peril of heading to Yankee Stadium two games down.

In a sport notorious for stats, they'll like this one: since the best-of-seven format came to the League Championship Series in 1985, the team winning ALCS Game 2 has advanced to the World Series 28 times in 34 series, including 19 of the last 21.

With stacked odds like that. New York had best be ready for anything. Maybe Sánchez should ask his bat supplier to express deliver a snow shovel.