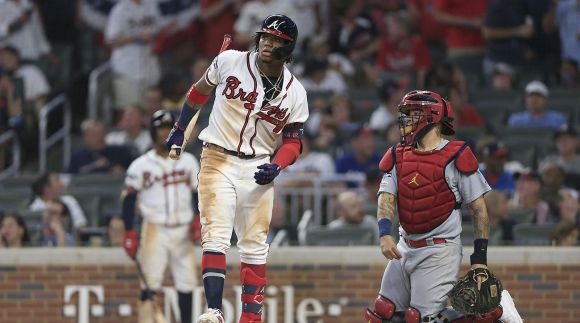 Ronald Acuña Jr has got to be one of the most maddening players in MLB.

While ridiculously talented, he's also still quite young, a reality that sometimes causes his worst instincts to overwhelm his better judgment.

Specifically, we're referencing his predilection to watching his batted balls bounce off the outfield wall, a habit that usually produces long singles and red asses in the dugout.

You may recall when he pulled this shit back in August against the Dodgers:

Ronald Acuña Jr. has been taken out of the biggest game yet for watching a potential HR turned single. This will be a GOOD LESSON for a young player with TONS of talent. Snitker Cares about Ñ, THE TEAM & sends a message to everyone about playing the game the right way. #ChopOn pic.twitter.com/ysPYnUczfE

And here's the aftermath in the dugout.

Okay, that may be a tad harsh, especially since dude's insanely good at baseball.

Sadly, the lesson from August wasn't learned, as Acuña pulled that same shit in Game ! of the NLDS.

This happened in the bottom of the 7th with the Braves up, 3-1.

Now we're pretty sure that Acuña didn't allow six runs in the final two innings in an eventual 7-6 loss to the Cardinals.

That was definitely the bullpen.

As Freddie Freeman mused afterwards, they can't keep having the same conversation with Acuña.

Of course, you also can't bench your best player in the postseason: