The Orioles Salvage Their Entire Season with One Remarkable Catch 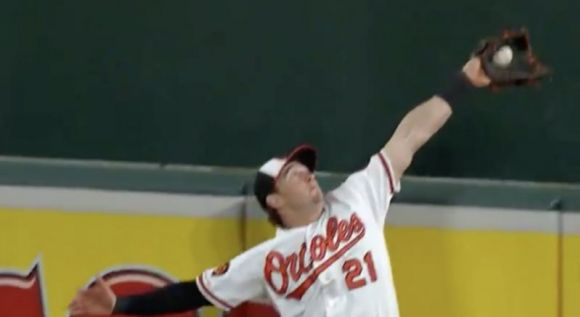 If the Baltimore Orioles' baseball season were a movie, the genre would have to be low-budget horror.

But despite the cavalcade of shit that's reigned down on this organization, they have somehow persevered, if only by showing up night after night to absorb another beating.

This masochistic desire to finish their schedule has finally yielded something positive, courtesy of young outfielder Austin Hays.

Dude made a catch in center field against the Blue Jays that might not completely wipe away the stench of this lost season for the Birds, but it comes damn close.

Behold a finalist for best catch ever by a 24-year old centerfielder on a 100-loss team, which is admittedly an obscure category akin to best sound in a foreign language film directed by a dwarf:

Austin Hays. You are RIDICULOUS! 😱 pic.twitter.com/PZ5JpnxjOJ

Everyone appeared to be in shock after that gorgeous play, including Vlad Guerrero Jr, who simply tipped his cap in a show of admiration.

We're also happy for Gary Thorne, who in his capacity as Orioles play-by-play dude has suffered the tortures of the damned this season.

And that finally brings us to Hays himself, who was super-humble after the game.

He even described his spontaneous White Kong chest beating celebration.