Gleyber Torres Is Having a Career against the Orioles This Season 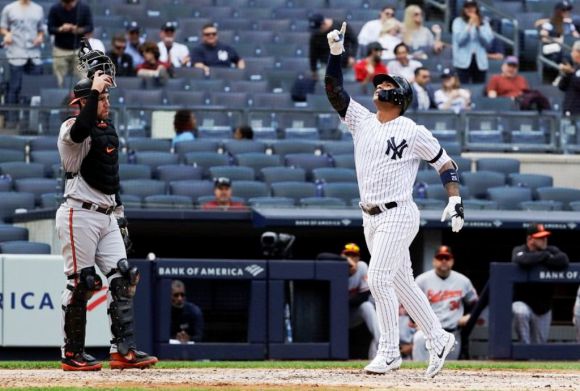 However, they've somehow found another level of suck, comparable to one of Dante's nine circles of Hell.

The Birds are allowing homers at a frightening pace, having already blown past 100 so far.

The New York Yankees have enjoyed feeding at the trough, but one dude in particular will be sending the Orioles a Christmas card this year.

For those of you playing the home game, it's Gleyber Torres.

Incredibly, the Bronx Bomber infielder has hit 10 of his 12 dingers this season against the Orioles, which doesn't seem possible.

Sadly for the Birds, we speak the truth.

That tragic footage was from a doubleheader at Yankee Stadium last week, with Torres popping three bombs in the two games.

He continued the systematic torture at Camden Yards this week.

Yep, that's four multi-homer games for Torres, all of them verses the Orioles.

Honestly, we'd like the carnage to stop if only to not hear John Sterling create those horrible puns.

And also, someone might want to check on Orioles broadcaster Gary Thorne, because he sounds like a broken man.

Thanks to the sadists responsible for the MLB schedule, New York gets to play Baltimore six more times in August, so stay tuned.

Just imagine if the Birds played the Twins more often.