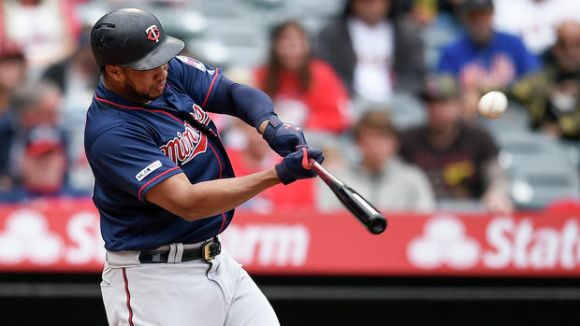 The red-headed stepchild stat that most typifies MLB these days belongs to Joey Gallo of the Texas Rangers.

How long is it gonna be until no one thinks that's crazy anymore?

Damn right it is, and look to the mashin' Minnesota Twins as the latest exhibit.

The New York Yankees bashed their way through the 2019 season via a then-record 267 bombs. Some fans were amazed. Old School fans were aghast. Hall of Fame legend Frank 'Home Run' Baker -- dude bopped a whole 12 of 'em in 1913 -- was not available for comment.

Already this season, mere Minnesota mortals Eddie Rosario (14) and CJ Cron (13) have outdone his season high in less than 50 games.

At the rate dudes and their teammates are sending baseballs to the promised land, they'll wind up with 324.

This is not a wild extrapolation. The season's past its quarter pole.

Now, for the second time already, the Twins have launched eight long balls in a single game. OK, it was against the Los Angeles Angels, but they still count:

Maybe it's just the times we live in.

Those blasts weren't cheap, either. Seven of them went farther than 400 feet.

For frame of reference, the American League team average for homers after 49 games is 68.

However, as an indicator of success, consider this:

To date, then, here's how has Minnesota racked 'em up against current contenders:

Kinda telling they've only played 13 games so far against the leaders, going 5-8 with 16 round-trippers.

Interestingly, the other game this season where they unloaded eight bombs also resulted in a 16-7 victory, this time over the alleged Baltimore Orioles.

Their 33-16 record, then, is putting hay in the barn, which may come in handy when they ultimately fulfill their obligation to play more contenders.

Fortunately for them, unless Cleveland rises like a bottle rocket, none of them will reside in the AL Central.

We'll see about that come September.

Who knows? Maybe they'll ultimately light up their probable post-season opponents, too. Those games are gonna bear serious watching.

Until then, their long-suffering fans have reason to revel, not to mention sit in the bleachers.