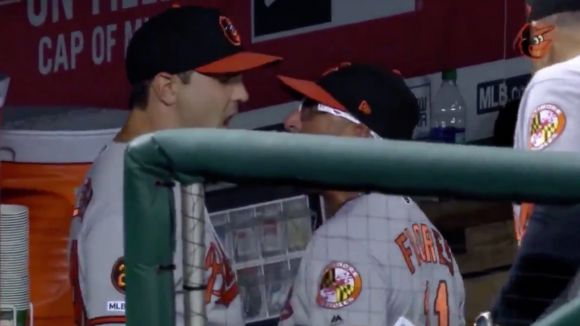 The Baltimore Orioles currently sit at a putrid 44-89.

However, mere numbers don't even begin to tell the story of this daytime talk show of a franchise.

Actually, it's more akin to a multi-camera sitcom, only the laugh track is unnecessary.

Also, the characters don't actually learn anything, and there's no suga-rcoated ending to be found.

Earlier this month, this dysfunction was on full display when the possibly cursed Chris Davis went after frightened rookie manager Brandon Hyde right there in the dugout.

This went down while the Yankees were impaling the Orioles over and over again, but it was also an accumulation of frustration and angst.

Incredibly, there was yet another dugout confrontation this week, as these people seem to have the impulse control of a mature toddler.

As if the situation doesn't sound mundane enough, this one involved a middle reliever and an infield coach.

Please hold your applause until the end:

Richard Bleier and Orioles infield coach Jose Flores seemed to have some choice words for each other after Bleier was yanked when he allowed four hits and three runs while recording one out. One assumes defensive alignments were part of the conversation. pic.twitter.com/mdQLJDHaQR

Bleier appears to be wondering aloud why Flores would go out of his way to sabotage the Orioles infield defense and team ERA.

It's a valid query.

At this point, the O's should probably lean into this hopelessly broken dynamic and just go full mutiny.