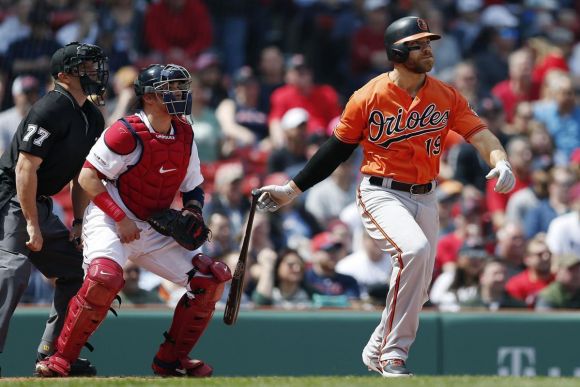 Here's a piece of MLB news that may startle you.

In fact, it might be better to sit down first.

Yesterday, Chris Davis had two doubles and a single in five at-bats, driving in four runs.

For those not familiar with the Guantanamo Bay-style torture of dude's season, this otherwise normal stat line is deeply significant.

Our new favorite baseball player in the whole wide world entered this game at Fenway Park riding an inconceivable and historic 0-for-54 hitless streak dating back to last season.

We now gleefully present you with a positive Chris Davis highlight package, which was beginning to seem like an impossibility:

Right the hell on, dude.

It's remarkable to consider that a player who almost won an MVP in 2013 and is right in the middle of a $161million contract has actually become an underdog, but it's difficult not to root for him.

Anyone with a shred of compassion had to feel for Davis, who maintained a strange nobility throughout the nightmarish run of futility.

Of course, this three-hit day only raised his season average to .079, so there's still some work to do.