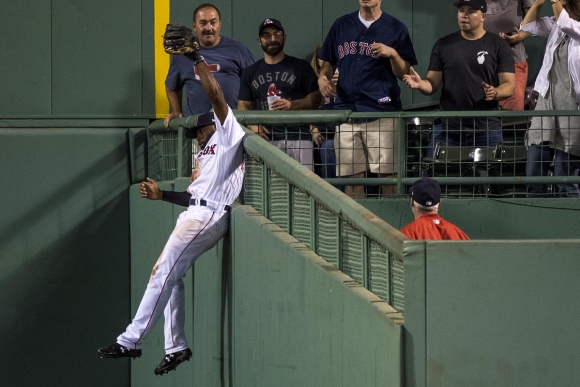 It takes plenty of nerve just to play ball in front of a live crowd and television audience.

But to commit felony theft while doing so requires a unique skill set.

Jackie Bradley Jr is clearly the proud owner of a shiny one.

The Boston Red Sox centerfielder brazenly took something that didn't belong to him against the New York Yankees this past Sunday night.

Damn, that catch went down easy.

ESPN would have to be considered complicit in this crime and possibly an accessory after the fact, but it appears Bradley will avoid prosecution.

The grab was just that good.

The victim of this sensational crime was Yankees rookie Aaron Judge, whose exploits this season have taken on an almost mythical status.

This would've been Judge's 31st homer this year, but Bradley was having none of that.

Despite being victimized in front of so many people, Judge took it pretty well.

In fact, he even gave Bradley some love on the Twitter.

Again, the catch was just too good to deny.

Genius can take on so many forms.

Yes, Jackie Bradley Jr is the one who knocks.