Jake Arrieta Threatens to Scramble the Brains of Todd Frazier 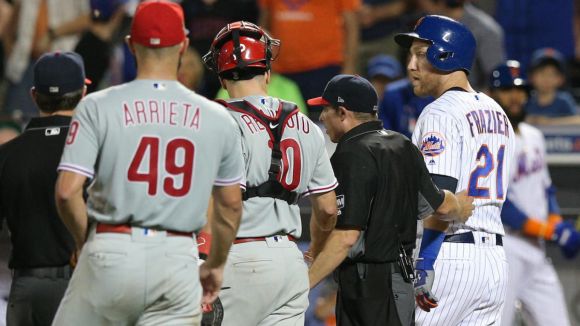 The Phillies and Mets may not practice the most aesthetically pleasing brand of baseball, but they usually put on quite the show when playing each other.

Arrieta was having some issues in regard to pitch location, a problem that gently touched Frazier in an interesting fifth inning.

Fortunately, we have moving pictures of the incident:

Todd Frazier was hit by a Jake Arrieta pitch, and then ejected a few seconds later after he exchanged some words with Arrieta and umpires. pic.twitter.com/6ht8SLYk2r

Of course, that was an off-speed pitch that drifted into Frazier's personal space, but he seemed unhappy nonetheless.

After Frazier was asked to leave, Jake plunked yet another Met two batters later, raising the ire of the doomed Mickey Callaway.

The silver lining here is the ejection gave Mickey more time to craft articulate statements for the local media.

Defying all logic and reason, the Mets actually did respond to this nonsense in a positive way, beating Arrieta and the Phillies, 6-5, with the help of three runs in that wacky fifth inning.

Of course, the real fun began after the game, when Jake was questioned about the histrionics of Frazier:

"Frazier's not happy about it he can come see me. I'll put a dent in his skull."

Jake Arietta is a liiiiiiiittle mad about Todd Frazier being mad pic.twitter.com/OEjy1zo8ZG

Hmmm, some may perceive this as a threat, something MLB tends to frown upon.

And here's the requisite Frazier retort:

"He can say what he wants."

Sadly, we might not get a sequel to Arrieta v Frazier, as the former Cy Young winner is experiencing some elbow stuff.

Source confirms Arrieta does have arm problem that will be checked. @Ken_Rosenthal reporting Arrieta has bone spur in elbow. Arrieta hinted at injury last night, refused to expound

Meanwhile, the Mets remain appointment viewing, for all the wrong reasons.