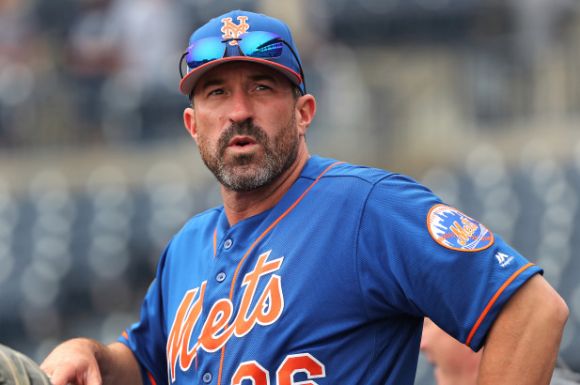 The New York Mets were having a pretty swell weekend in Chicago, for a while anyway.

Somehow, this miserable group had taken two of the first three games at Wrigley Field against the Cubs and had a late lead in the series finale on Sunday.

However, this string of competent baseball came to a abrupt halt when the Mets suddenly remembered they were the Mets.

It's almost as if the entire team had hit their heads at the same time when arriving in Chicago, only to get smacked in the head again on Sunday.

Of course, it's entirely possible that only manager Mickey Callaway and pitcher Jason Vargas were kicked by the mule, but we'll get to that in a moment.

The Mets were on the cusp of taking three out of four against the first-place Cubbies when this happened in the bottom of the eighth inning:

In the clubhouse afterwards, the Mets really started Metsing when the beleaguered Callaway completely lost his shit on a reporter from Newsday named Tim Healey.

Mickey Callaway told a reporter to leave the clubhouse, calling the reporter a motherfu**er multiple times.

Jason Vargas, defending his manager, said "I'll knock you the f**k out, bro."

Apparently, that bastard Healey had the nerve to tell Mickey that he would see him tomorrow, which the almost ex-manager interpreted as vicious sarcasm.

Vargas then got involved, literally threatening the probably bemused Healey in a decidedly physical manner before being restrained by teammates.

Here's Callaway not apologizing for his behavior or to Healey.

Mickey Callaway was anything but contrite in addressing last night's incident. Given multiple opportunities to apologize publicly, he declined each time. Callaway essentially said what he regrets was being in that place at that time.

It seems the Mets organization isn't beyond embarrassment, as this statement would suggest.

BREAKING: The Mets are fining both Mickey Callaway and Jason Vargas for their roles in last night's clubhouse altercation, but issuing no suspensions, according to general manager Brodie Van Wagenen.

Obviously, this is terribly embarrassing for all concerned and will probably spell the end for poor Mickey.

This decision won't change a thing, but the shitshow must go on.