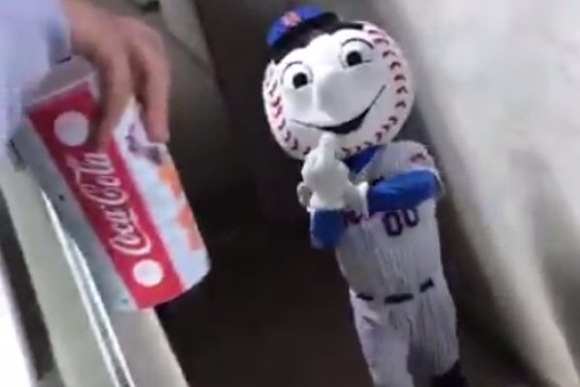 Mr Met, despite the formal dignity implied by his name, was not acting in a gentlemanly manner recently in Queens.

His team's miserable season is clearly wearing on the iconic New York Metropolitans mascot with the giant baseball head.

As a result, he reacted negatively to some gentle taunting from fans after a particularly ugly 7-1 loss to the Milwaukee Brewers.

Even Shoeless Joe Jackson, and DB Sweeney for that matter, would be disappointed in Mr Met right now.

The Mets organization was quick to apologize, although they have yet to show any formal contrition for the current state of their baseball team.

Many astute observers have pointed out the fact that Mr Met doesn't actually have a middle finger, but that's merely a matter of semantics.

Our heroes should be held to a higher standard.

The Mets have dispensed justice swiftly, firing the individual who happened to be wearing the giant baseball head at the time of the incident.

As to reports that Mr Met was headed to the clubhouse in search of sex toys, nothing has been confirmed.

Of course, this isn't the first time mascots have caused a scene.

We still expect more from Mr Met, though.