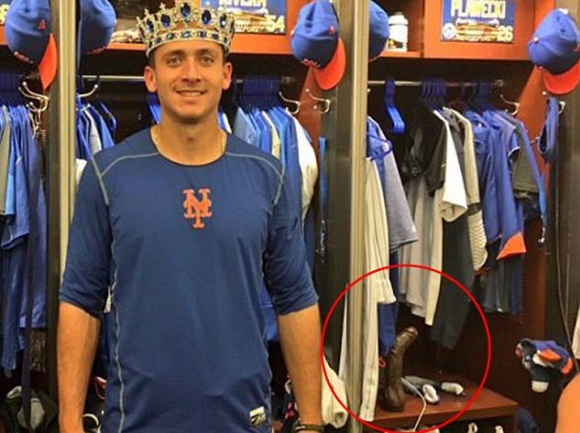 The Metropolitan Baseball Club has been rather bad at baseball this season.

As a result, it appears the organization is looking for alternative ways of appealing to their misery-steeped fan base.

The Mets actually won a game last week, erasing a 7-1 deficit to beat the Marlins 8-7 at Citi Field in New York.

The primary heroics were provided by none other than TJ Rivera, who homered and doubled in the tying runs in the five-run Mets' seventh inning.

Later, Rivera was photographed in the locker room basking in the afterglow of his big night with a crown on his head, which is apparently a thing the Mets do with the player of the game.

However, that's not the issue here.

The sex toy in question was located in the locker of kinky backup catcher Kevin Plawecki and was lovingly depicted in the background of the photo.

Of course, the Mets immediately removed all incriminating evidence, but not before the vigilant Internet took care of business.

Obviously, Plawecki was the victim of a wacky baseball prank, but while he was able to chuckle about it, he does seem a bit mortified by the whole affair.

It should be noted that this sort of thing is no longer the exclusive domain of Buffalo Bills fans.

See, it could have been worse.