The Mets Have Now Resorted to Killing Their Ex-Players 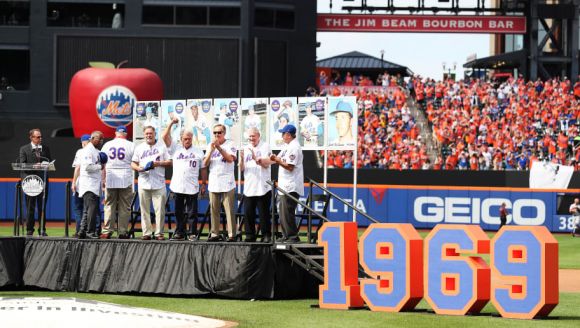 Obviously, the present state of the New York Metropolitan Baseball Club doesn't justify a celebration, unless you're some sort of dysfunction fetishist.

The Mets seem to be aware of how ridiculous they are, so the organization recently reached into the past and realized it was the 50th anniversary of a successful season.

Indeed, the 1969 Metropolitans were good at baseball and deserving of a formal acknowledgement, if only to distract fans from the smoldering wreckage of the 2019 team.

Sadly, they couldn't even do this properly.

Members of the Miracle Mets still willing to be publicly associated with the organization were honored on the field, and some who couldn't be there, including former ace Tom Seaver, were acknowledged as well.

In addition, an Academy Awards-style homage to deceased players from that team played on the video board.

The Mets paid tribute to Jim Gosger and Jesse Hudson in their 1969 video. But both are alive. pic.twitter.com/egJNu2lzNG

Somehow, the organization was able to distill the Mets experience into one bumbling moment.

Even Jim Gosger, who is in fact still alive despite his former team trying to murder him, couldn't resist taking a shot.

It also seems that Jim may have some Mets takes of his own. pic.twitter.com/sWwSUfqeKi

Meanwhile, back on the field, the Mets have apparently broken Mike Francesa after pissing a game away in Philly.

Most of you heard the clip of Mike Francesa exploding after Edwin Diaz blew the game for the #Mets today. Here are the highlights of him watching the entire bottom of the 9th unfold. And yes... it's glorious. 💣 pic.twitter.com/RnnPLQjHYE