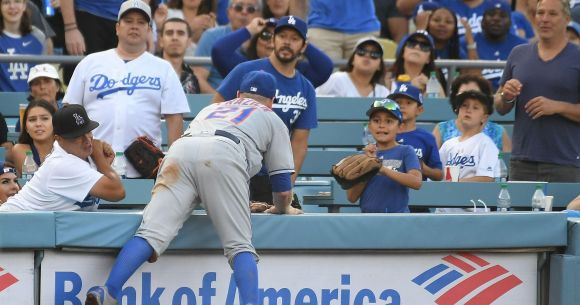 Hollywood can be a plastic and artificial place, with the lines between fantasy and reality hopelessly blurred.

This might sound a bit heavy in the context of baseball, but Todd Frazier respectfully disagrees.

The New York Mets third baseman recently pulled off a rather clever deception in L.A. against the Dodgers, confusing fans, teammates and umpires in the process.

Now that just appears to be footage of the Toddfather sacrificing life and limb to make a spectacular catch in the stands.

However, as with most things, there's more to the story.

Through the tireless efforts of diligent truth seekers and the magic of video, this farce has been exposed.

Frazier definitely gets some cool points for having the audacity to show the umpires a phony ball, and everyone seems to have had a good time. Lets just hope that Rob Manfred and his uptight minions don't start in with their integrity of the game nonsense.

Actually, Frazier himself has been burned with the old hidden ball trick.

Irony, your table is ready.